Jesus Builds, Not Us

Does there come a time when, and this is taking it to a different level, when you have relationships and you are walking somewhat together and Light comes into the relationships and all of a sudden there are walls that come up or persecution comes back in these relationships, accusations, etc. How far do you continue to try to walk these things out with them or try to bring light into this darkness obviously that has so filled their lives that they want to persecute you or try to convince you that they are right?

This is kind of akin to that question: If what God is after is the Life of the Church where we are daily relating to one another, the whole Church, not some committed nucleus of 10 or 15 or 20%, but the entire Church, from the least to the greatest they all know Him and they live that way. If that’s really what God is after, and I think we all know that it is, then how do you get there? If what I am saying to you in these last few minutes is that you really ought to work out the relationships God has given you and pour your heart and life into those; speak the Truth in love and let the Life become the Light of men, then at what point does God get His Church out of the deal? How do you start something “new” that’s the right thing if you’re busy trying to beat your head against the wall with the “wrong thing”? Where does the “new thing” come from? The answer to that question is that we don’t start any “new thing.” If we are really in touch with God then we don’t start anything. Jesus said, “I will build My Church that the gates of hell will not prevail against.”

Our faithfulness to love the people God has put in our lives could emerge into something that God is building, but that is His business, that’s not our business. That’s not our job to go start something that is better than the thing that we left. It’s our job to love people. The thing God is building is people, and certainly, He wants to have a City set on a hill that can’t be hidden, not just a bunch of candlesticks in the middle of the caverns that are spread out all over the country.

He does want to build a people. We talked about that earlier, but how does He get a people? He gets a people through individuals that are walking out the way of the cross, with the sphere of relationships that God has given them and it emerges into what God wants to build. It’s not something that we plot or plan or we start. There will be no “champagne bottle on the hull” of the church in this city or that city that God is building.

“Ok, we’ll start next week.” “Starting next month we’re going to start it and we’re going to do it right.” If you ever have any words or ideas like that come up, you can be real sure you are going to fail because God doesn’t do it that way. He is emerging out of Life. It is not something we do, or we accomplish, or we start, or we copy from something else that is better than some other thing.

Now Jesus said, “I would have gathered you like a hen gathers her chicks, but you would not.” You can see in that one sentence that there is a pretty large theme about how Jesus approached the whole thing. He didn’t say, “You guys are out of it. I’m going to start another thing with people who really care.” What He said was, “I’ve tried and I’ve tried and I’ve tried and you put Me out of the synagogue. You put Me out in this situation. I didn’t do that. You did it. I would have gathered you as a hen gathers her chicks, but you would not. You are essentially what terminated our relationship. I was committed to you to the end and you don’t want to ever see My face again. You probably will whether you like it or not. But it’s not Me deciding I don’t like you anymore, I’m done with you. I would have gathered you...” I don’t mean that in some kind of arrogant way where we know so much. I don’t mean that. I just mean that that’s our heart, is it’s not us isolating and separating. It’s others that force us into a situation that we never would have wanted to be in with the relationship that they are not interested in anymore. I am laying my life down for them; I’m speaking the truth in love. If they don’t love the Light, not because I’m obnoxious or pushy, but because I see them being sharp with their children and I say, “Please don’t do that. Jesus isn’t like that. You are giving them the wrong idea of God. I may not be any better than you at it, maybe I’m not the best example, maybe you don’t even respect it, but could I beg you at least to fast and pray about it one day, that that kind of sharpness with your children isn’t like Jesus? I’ll fast with you about it. You can tell me everything you see wrong in how I’m doing. This is not a competition. I just want to see the mercy and love of God in this situation rather than impatience, please.” And they say, “Mind your own business, buddy.”

Now when you start getting into situations like that, you can get your feelings hurt and run away from it, or you can weep and try again next time until they don’t want to see your face anymore. Again, the attitude is “I would have gathered you as a hen gathers her chicks, but you would not. I wanted this relationship to the end, but you would not.” So what happens is, when we are all living life out that way in the environment that God has given us, what emerges from that are refined and expanded characters, more in love with God, more deeply trusting of God, more knowledgeable of God’s will, more refined by the way of the cross, and we emerge, it’s like we are pushed out of the womb into reality and into well, you could call it Church life, because God then has birthed it. “I would have gathered you, but you would not. You killed me and I rose from the dead.”

That’s the kind of thing that is an ear-mark of what God does instead of some neato-keeno way where we do this and that and we don’t do this anymore and we used to do that, now we do this instead. All of that is external, and some of it is kind of clever, but the real stuff has to do with the heart, loving the truth, loving righteousness. Remember in Jeremiah it said, “Anyone that stood in my council sayeth the Lord will turn Israel from their sin.” If we have ever known God, if we have ever been in God’s presence, in His counsel, it is going to be our heart to turn Israel from her sin. The thing that separates her, the thing that wounds Jesus and separates her from intimacy with Jesus, we are going to try to turn Israel from her sin if we have ever been in God’s counsel ourself. That becomes this thing that becomes either an abomination to one that doesn’t love the light, or becomes very attractive to even a very weak person but they do love the light-- the woman caught in adultery, Mary Magdalene. People that love the light, it doesn’t matter how bad their life is, if they want to come into the light, if they want help – “I’m weak, I’m addicted to this thing, this way of life. Please help.”

That sort of turning towards Jesus and towards the Light is unbelievable freedom and power. Then God builds, just like David’s mighty men were seemingly built out of those that were despondent and bankrupt and in despair out of Saul’s kingdom. So also God builds mighty men of the weak and the lowly and despised things and the things that are not. He begins to build out of those that have done their best sincerely to serve God and have been pushed out of the womb of God into a life that we can now share together because we have all walked the way of the cross and found Jesus.

I don’t think there is a point in which we just say, “You’ve had your chance, now buster.” Paul even tried to say that once and you turn the page and he is right back at it again. “I now wash my hands of you. I’m going to the Gentiles.” Turn the page and he is back with the Jews. He couldn’t find it within himself to pull himself away and isolate himself. He was still pouring his heart out. He would have gathered them, but they would not, and what emerged from that was true Church Life. I know this is a hard saying, but I think you will love how it turns out if you will walk this out. It’s so rich, it’s so full, and it’s so blameless. And yet it’s not compromising in any way. I am not spending the next 23 years watching my children destroyed by something and watching marriages fall apart, compromise, graft and corruption, false teaching left and right and I’m just being a good ol’ boy, staying in the middle of it trying to work from within. We are not talking about compromise, but we are also not talking about a prima donna attitude that considers ourselves so good that we are not willing to lay our lives down until they would not, until they throw us out, until they crucify us. But we are walking in love all the way to the end to the best of whatever grace God can provide for us. I know that every situation is different, but I think those are the principals to build on in its most basic form. 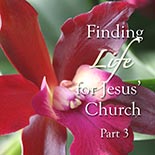