The Journey. Children, fathers, young men. 2 Corinthians 10:4 says that we have divine weapons to destroy satan’s strongholds. Either that’s theory or it’s reality. I say for those who will pay that price, it’s reality.

2 Cor. 6:3-13: “We put no stumbling block in anyone’s path, so that our ministry will not be discredited. Rather, as servants of God we commend ourselves in every way: in great endurance; in troubles, hardships and distresses…”

“…in beatings, imprisonments and riots; in hard work, sleepless nights…”

Are you even ready for that one -- sleepless nights for His name’s sake?

How about that one?

“…in purity, in understanding, in patience and kindness; in the Holy Spirit and in sincere love; in truthful speech and in the power of God; with weapons of righteousness in the right hand and in the left; through glory and dishonor, bad report and good report; genuine, yet regarded as imposters; known, yet regarded as unknown; dying, and yet we live on; beaten, and yet not killed; sorrowful, yet always rejoicing; poor, yet making many rich…”

“…having nothing, and yet possessing everything.”

The weapons of righteousness in the left hand and in the right. Having the power of God, the glory of God, dwelling in our souls and in our beings. That overcoming life that you and I were meant for before the world was. God knew you by name and that was His destiny for you, and all other things work for that good according to Romans 8:28-30 -- for that good, and that good alone. Not so that you will enjoy yourself more, but so that you will become more and more unto the full measure of the stature of Jesus Christ (Eph. 4:13; Rom. 8:29; Phil. 2:14-16).

Again, I want you to spend some time with these things. I hope you will. “Do everything without complaining or arguing, so that you may become blameless and pure, children of God without fault in a crooked and depraved generation, in which you shine like stars in the universe as you hold out the word of life in order that I may boast on the day of Christ that I did not run or labor for nothing.” (Phil 2:14-16)

Shine like the stars in the universe. Hold out the word of life. That’s the Christian message. That’s the Christian life. Not having our sins forgiven only, but shining like stars in the universe and holding out the Word of Life in power and glory and authority, eating from the hidden manna, being nourished by the bread of life, the bread from heaven. Don’t settle for less.

1 Corinthians 10:1-16 talks about a people who settled for less. They were given the land. They were given every opportunity and they bailed out. They didn’t need to bail out and we don’t need to. Philippians 3:12 says that Paul lived for that which Christ apprehended him for. His purpose for living was to look at the reason God apprehended him and to lay hold of that -- to have vision -- without vision, the people perish. Without revelation of the glory of God and what He is trying to do in our lives, the people cast off restraint. We are to live for that which Christ apprehended us for.

Eph. 5:27: “Christ’s purpose is to present to Himself a radiant church without stain or wrinkle, no age marks or any blemish, but holy and blameless.” That’s His purpose. That’s the Bride prepared for the return of the Lamb. And guess what? The Bride makes Herself ready, the Revelation letter says. We’ve got to enter into that. We’ve got to pursue that. God isn’t going to do it totally apart from our wills.

Eph. 3:10: “God’s intent was that now, through the church, the manifold wisdom of God should be made known to the rulers and authorities in the heavenly realms, according to His eternal purpose which He accomplished in Christ Jesus our Lord. In Him and through faith in Him we may approach God with freedom and confidence. I ask you, therefore, not to be discouraged because of my sufferings for you, which are your glory.”

God’s purpose was that through the church His manifold wisdom would be made known to the principalities and powers. Who are the principalities and powers? Angels. All the beings in the unseen world, all the hierarchy of power, the archangel, the cherubim, the seraphim, the devil and all his helpers. God’s purpose was that His manifold wisdom, His awesome wisdom, would be made known to the unseen kingdom, to the angels, through the church.

In 1 Peter 1:10: “Concerning this salvation, the prophets who spoke of the grace that was come to you, searched intently and with the greatest care, trying to find out the time and circumstances to which the Spirit of Christ in them was pointing when He predicted the sufferings of Christ and the glories that would follow.”

There’s a definition of how to study your Bible if you want to go back and look at it sometime. “It was revealed to them that they were not serving themselves, but you, when they spoke of the things that have now been told to you by those who have preached the gospel by the Holy Spirit sent from heaven. Even the angels long to look into these things.”

I want you to realize that these things that I’ve been sharing with you are not milk. I think you would agree with that. This isn’t stuff like, “Now I lay me down to sleep, and deliver my soul at the hour of my death. Amen.” This has to do with God’s eternal purpose, looking at it through His eyes and what He is trying to accomplish.

And here’s the really neat thing. He never told the angels what He was going to do. He didn’t tell them. It’s God’s purpose to make His awesome wisdom and power known to the angels, to impress the angels with His awesome wisdom and power by what He is doing in the church, and “even the angels long to look into these things.” You may not realize this, but there may be one hundred or one thousand angels around you right now taking notes. :) God’s wisdom and His power is going to be displayed through the people that will somehow lay their lives into the hands of God and serve His purposes at any cost -- at absolutely any cost.

God is going to astound the angels with His power and wisdom through the church, mortal human beings just like us. And the angels say, “Could it be possible?” Not only is it possible, but it is going to happen. But without vision, without revelation, people cast off restraint. They won’t play the game. Unless you see these things, unless it’s revelation to your soul. It’s like, “I will settle for nothing less than that. It’s God’s purpose! He said so! His word will be fulfilled! I will be in on it! No matter what happens. I will be in on it. I’m going to be in on it. I’m going to pay the price.”

There will be a people, God said, that will kick down and destroy the gates of hell and be overcomers that will hasten the return of the Lord. It can be any of us or all of us. And the angels are saying, “Go for it!” You be those people.

Do you want in on that?

Lord God, You’ve made us glad as You’ve shown us more of Yourself and more of the nature of Your Kingdom, a kingdom that is supernatural and doesn’t derive from anything on this earth. It has nothing to do with our intellect or anything we can do in ourselves. But our Father, as You have created this universe and breathed it into being, You’ve breathed a shadow into existence. This planet earth and this galaxy around us that You’re going to roll up as a scroll to prove that it’s only a shadow. Our Father we ask that You would continually open us up to that and to the nature of Jesus Christ. That we’d have a revelation that flesh and blood and the human things we’ve seen and heard and known from this world would never be able to open to us what You will and can open to us.

Father, we know that You’re looking for an overcoming People and we know that You’ll have that people. Father, it’s my prayer that You’d impart to each person here, a revelation of the God, the living, of Jesus Christ. That You would bring us into an intimacy with You, our Father and Jesus Christ whom You’ve sent.

Our Father, more than anything, we as covenant men and women, will decide tonight to make Your enemies our enemies. The things You love, the things that we love. Father help us to hate what You hate and to love and nurture what You love and nurture. Help us to have a Fatherheart and to know the Ancient Life within us, Him who is from the beginning.

Father, we ask in the Name of Jesus, that You would open the gates of Heaven. Let us see and experience these things and walk in them with authority and power and eat from the hidden manna with the rod of Aaron, with weapons of righteousness in our left hand and in our right hand. Father, let Your Name be glorified as Your enemies become Your footstool and as we’re vessels to carry that to completion. Help us to willingly lay down our lives so this can happen quickly. We pray in the Name of Jesus Your Son, the Conqueror. Amen. 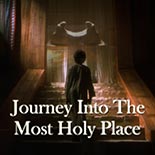