How Bad Do You Want Him?

(Text begins about 1 minute into audio.)

This song is about Zacchaeus. Most of you children probably know who he was. He was the little man who climbed up in a tree to see Jesus. One thing I was thinking about when I wrote this song was that if you look through the New Testament there are a lot of stories that are just like Zacchaeus’s. Have you ever thought of that? I haven’t thought about that, and I’m a lot older than you children. So it wouldn’t surprise me if you haven’t. But when you look through the New Testament time and time again, there are stories about people who went beyond the crowd around them to really find Jesus. There’s a story of the blind man on the road to Jericho. Do you remember that one? Everyone was telling him, “Be quiet be quiet.” But he kept saying, “Jesus Son of David, have mercy on me. I want to be healed.” He just would not give up until Jesus healed him.

There’s a story of a lady that we saw in this movie that had a medical problem where she was bleeding. She thought if I can just touch Jesus, and Jesus said, “Who touched me?” Everybody thought that was silly because there were lots of people all around Him, but He said, “No, someone touched me. I’m talking about something different then what you guys are seeing.” There was also that story of the lady that got past the mean people who didn’t want her to come in and wipe Jesus’ feet with her tears and her hair. She pushed herself outside of the crowd. Then there’s Zacchaeus who went up in a tree to be able to see Jesus. Zacchaeus could have gotten to that road and just said, “Well, there are just too many people here. I guess I’m not going to be able to see Jesus.” He could have made excuses and said, “God made me this way; I’m just too short, there’s nothing I can do about it. It’s not my fault.” And just could have walked his way home. But he was really hungry to get to see Jesus, and obviously something was going on in him before then, which made him want to see Jesus so badly. It probably didn’t just happen where he was just a sightseer like a lot of other people that were there. A lot of the people were probably just there to see Him because it was an honor, and He was so different--just like a circus coming into town. “Here comes Jesus and that’s something to do rather then thresh wheat,” or whatever stuff they did. So it was just kind of something fun to do. Zacchaeus wasn’t like that, but there are a lot of other stories in the Bible of people that just really, really wanted to know God so badly, and they cared so much, that they went way beyond what might be expected and what most other people in their time did.

There are many stories like that, and you can read some of them yourself or have your mom and dad read some of them to you. But that’s the thing that Jesus is looking for. Remember the centurion came to Him and said, “I want my servant to be healed”? Jesus said, “Ok, I’ll come to your house.” The centurion said, “Oh, you don’t even need to do that, just say the word--I understand how all this works.” And Jesus was just amazed at his faith! There was another guy that just wanted to go to Jesus and get to know Him and get what he needed from Him. Jairus, the synagogue president, (also in the video) wanted his daughter to be healed. So he went to Jesus and begged Him to come. He didn’t just say, “Hey Jesus, would you come to my house? You probably don’t want to.” He begged Him, and fell on his knees and said, “Lord please, my daughter is sick.” So that’s something for you all to think about from what we were talking about earlier. If you want to get to know Jesus, that’s the attitude that He’s looking for. When He sees people like that, that care so much that they’re ready to climb trees or fall on their face or wipe His feet with their hair, that’s the kind of people He wants, and that’s what the Church is supposed to be. It’s all these people that are like that, together in one place. Something very special happens when it’s one body, one loaf of people that aren’t divided, where everyone’s passion is to know Jesus that much, that badly. Everyone wants to know Him, and then God can do very special things instead of just an individual’s life.

The other thing you should probably think about with this story is that Zacchaeus definitely wasn’t the nicest man in the crowd. He wasn’t the nicest man; he probably wasn’t the most perfect man. He probably wasn’t the man who made the least mistakes, and he probably wasn’t the kindest man in the crowd. In fact, we know for a fact that he was one of the worst men. He was apparently a traitor--at least from the Jewish perspective he was working for the bad guys and stole. He wasn’t one of the nicest ones, but that’s not the one Jesus picked out. You know what Zacchaeus was though? He appears to have been the one that wanted it the most. They talk about that sometimes with sports. The team that wins isn’t always the most talented, but is the team that wants it the most. That’s the way it is with knowing Jesus too. It’s not about who is the nicest or the kindest or has the fewest bad attitudes or is the kindest to their friends. The ones that get to know Jesus are the ones that want it the most, plain and simple! It doesn’t get more complicated than that. If you really want to know Jesus, then He calls you out like Zacchaeus, and you get a chance to spend time with Him like Zacchaeus did. But if you don’t really care that much or you can take it or leave it, well, like we talked about earlier you have to draw near to God for Him to draw near to you. If you listen to the last line of the song--and that’s an important line of the song--Zacchaeus got to spend the day with Jesus and all those other people were badly disappointed because Jesus went off with Zacchaeus. And that’s who He spent the day with. And everyone else just stood there, and their parade was suddenly over. So, that’s the kind of people we want to be, like Zacchaeus, like Mary, like the centurion, like Jairus the synagogue leader. People who just really wanted to see Jesus, and it’s not just like it’s a kind of important thing in their life. It’s the ONLY thing in their life. It’s what really matters to them above and beyond anything else—nothing else is even close to second. 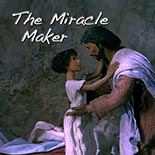