“‘Now, Lord, look on their threats, and grant to Your servants that with all boldness they may speak Your word, by stretching out Your hand to heal, and that signs and wonders may be done through the name of Your holy Servant Jesus’” (Acts 4:29).

“God, let these seeds be something that produce a crop. He who plants is nothing and he who waters is nothing.”

The declaration or proclamation of the Word of God and the testimony of the Word of God by the stretching out of His hand to do something that’s undeniable are always intimately linked together in the Scriptures. God stretches out His hand to confirm the Word that’s been spoken. “Yes, this is My Word. The Lord, He is God.” That has got to be the way we seek after the propagation of His Kingdom.

Friendship evangelism is out for me. I’m all for being friends of people, and I’m going to lay down my life for them. That’s what Jesus did. He came to serve, not to be served. That’s who Jesus is, so if Jesus lives in me, I will lay down my life for every man I come into contact with, even those that consider themselves my enemies. I’ll die for them if the heart of Christ is really living in me and through me. By that I don’t mean that I’ll be gruff and uncaring and rude. But I do mean this: I can put my hand on their shoulder and look at them with eyes of love and say, “God is not up for a vote. He doesn’t need your permission to be Lord. He is Lord, so bow your knee. I declare to you the Kingdom of God. If you’d like in on it, that’s fine. If not, one day all of His enemies will be made His footstool. So, choose to be the footstool if you wish.”

That’s the nature of it and that’s the kind of declaration that God follows with His testimony. It’s a declaration and a proclamation, not idle reasoning or philosophical arguments or the “Romans road” approach or door-knocking house to house. It’s a proclamation that God is sovereign—the Good News. Paul says, “How beautiful are the feet of those who bring good news” (Romans 10:15). He’s quoting Isaiah and if you go back and look it up, Paul just left off the colon and the end part of it, which is, “Our God reigns” (Isaiah 52:7).

“Only God can give the increase, so to Him be the glory.”

That’s the Good News: our God reigns. He’s Lord of all, He’s King of kings, and He’s coming on His white horse, Faithful and True, to judge the nations with an iron scepter. He’s going to come and tread out the winepress of the wrath of God Almighty. All the enemies of God will be made His footstool. That’s the nature of this Kingdom and so we say to people, “If you want in, praise God. If you don’t, that’s your choice, but I beg you and plead with you to save yourselves from this corrupt generation.” That’s the heart and the message that God follows: Jesus is Lord. It’s not that someday out there He will be Lord. It’s that He is Lord now.

You do not need to beg people, “Pretty please, make Him Lord?” The message is that Jesus Christ is Lord. He is the King of all the kings and the Lord of all the lords. He is the ruler of the heavens and the earth and those under the earth. That’s what it’s all about. And God will follow the proclaiming of that kind of message that lays bare the heart and declares Him to be who He is.

“And the multitudes with one accord heeded the things spoken by Philip, hearing and seeing the miracles which he did” (Acts 8:6).

Notice those words again—“hearing and seeing the miracles which he did.”

Remember in Acts 13 when Paul met Elymas, Bar-Jesus, the “son” of Jesus, the impostor of Jesus? The proconsul Sergius Paulus was being persuaded by this man, Elymas. Whoever he was, he must have been a very respectable kind of guy to be able to persuade a Roman proconsul. He must’ve been a shrewd three-piece-suit-and-leather-briefcase kind of guy to have that kind of influence on a man of proconsul rank. This Elymas was no fool and no court jester. Paul came to him and said, “You’re a child of satan and an enemy of everything that’s right. When will you stop perverting the right ways of God?” Paul, being full of the Spirit of Jesus said those things and then struck him blind. At that, Sergius Paulus said, “I believe.”

That has got to be our heart: “God do something. Pour out something that can be seen and heard. Prove Yourself. Confirm Your Word. I can’t do it and it’s not something I can persuade men about. The Kingdom of God does not consist of all of my words. It consists of power. And God, let these seeds be something that produce a crop. He who plants is nothing and he who waters is nothing. Only God can give the increase, so to Him be the glory.” 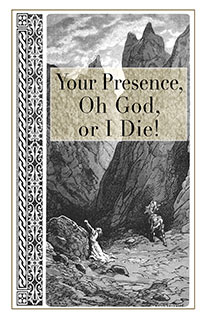