Remember the scripture, “Without vision the people perish”? This is an example of that. He knows what he’s fighting for. If you don’t know what you’re fighting for, you’re not willing to fight. That’s how it is. We’ve talked about “eating your spinach” and those sorts of things. Having a comprehension of what it is that God wants to do and why. Understanding what the history of man is all about and where man is going and what happens when the sky cracks open and Jesus comes back and everything that happens after that. Comprehending what it is we’re doing here and why we’re doing it and why we’re willing to endure the pain, makes the moments of getting hit in the mouth worthwhile. If you know what you’re fighting for, you’re willing to fight.

If you’re fighting for your children both Spiritually and physically, if you’re fighting for your parents and your neighbors, and if you’re fighting for those that Jesus calls his Friends and His Family...if you’re fighting for them and for Jesus’ Honor and Word, then you’re willing to fight. If it’s just a game and a hobby and something to do...if it’s a lifestyle, or culture, and external stuff, then when you get hit in the mouth, you quit. It’s because you don’t have any vision. You don’t know what it is you’re fighting for. But if you can look Jesus in the eye and see what’s in His Eyes and see what He wants and what He desires, then you’re willing to fight. You’re willing to endure and to persevere in persecution and difficulties and failures and all sorts of things. You keep right on pressing on because you See in His Eyes what it is you’re fighting for.   You saw the flashbacks in this movie. He’s seeing past-due notices. He’s seeing his sick children coughing in this shack that he’s living in where he can see his breath every day. And he’s saying, “I’m not going back there. If I have to choose between getting hit in the face and watching my children die right before my eyes, I’ll get hit in the face. I’m going to get my mouthpiece and I’m going to go back out because this is nothing compared to the alternative.”

And that’s what it is when you really know God and when you really understand who Jesus is and you’ve heard Jesus’ Words. You’ve heard His Voice, and you know what’s in His heart. You know what He wants and you know the price He paid, so you say, “I can endure the rest of this stuff. I don’t have to like it (nobody likes getting hit in the face), but if I have to choose between the alternative of disappointing Jesus and betraying the Trust that He put in me and compromising His Words and His Truth and His Dream and His Heart…if I have to choose compromise vs. pleasing Jesus, then I’ll get hit in the mouth before I’ll compromise. Show me in the scriptures or I’m not going to recant. Until you show me that God has a different Plan, then take me to the woodpile and pour oil on me and set me on fire.

Do what you will, but it’s neither safe nor right to ignore the Word of God, to ignore Jesus’ Truths, to compromise and make peace with the world and the things of the world and the ways of the world and false religion and all that stuff just because of social pressures and pain and disappointment and those who turn their back on Jesus. Yeah, all of that is disappointing--it’s a punch in the face--but all you’ve got to do is look in Jesus eye’s once and see what price He paid for the Truths in the 39 or 40 months-- the price He paid in order see His Father’s Will done and say, “I’m not backing off.  Do what you want to with me, but I’m not backing off.”

“Without vision the people perish.” If you don’t know what you’re fighting for, then you’re not going to be willing to fight very much. If it’s for comfort, it won’t last. You can’t endure the price that has to be involved. Jesus, in Luke 14, talked about building the tower and the cost, but not evaluating properly what it’s going to cost to build the tower. So some people get it half up, but they didn’t have a vision of what it was they’re trying to do. They just started building, building. “Why not build. I’m here. Might as well build…” but they didn’t count the cost. Those were the words Jesus used. They got the tower half up and they had to quit. They were quitters, and it was a monument to their foolishness, half-built.

When you go over to third world countries you see it all over the place in Egypt, or Africa, India, China, Brazil, third world countries. You’re driving down the road and you see a building that’s half up and nobody around it for miles. It’s not like there’s construction workers there. Somebody put it halfway up and couldn’t afford to finish it and they abandoned it. And the monument to their foolishness is just standing there for the whole world to see because they didn’t count the cost.

And that’s what a lot of people do in the religious world too. They don’t have a vision for what God wants and they weren’t really willing to get punched in the mouth for it and so they started something they were unwilling to finish. Jesus said that’s a fool’s approach to life. You need to look clearly at what this thing is and when you realize this present age and all that it has to offer is a bunch of nothing anyway. It’s all fool’s gold. It’s all fake.

They don’t have anything to offer me. They can’t pay me. They don’t have anything I want, so I don’t have any problem paying the ultimate price for the Pearl because I’m paying for the Pearl with monopoly money. It doesn’t make any difference because I’m not losing anything and I’m gaining everything. So I’m willing to go all the way and finish this thing, even to the point of death if necessary, for the sake of Truth, without compromise. To see what Jesus wants and to pay the price all the way through no matter how I feel, no matter what anyone else does or how they respond, no matter whether I fail or not, none of that is relevant. I’m going to finish the Race. I’m going to go all the way through this thing.

He’s willing to deal with this. He’ll say it right out of his own mouth, “This is nothing compared to the alternative. I don’t have any problem going through this. Risking my life? So what? I risk my life on the docks. You don’t think you’re risking your life when you’re on a scaffolding working your third straight shift getting enough money together for milk? You don’t think that’s risking your life? I don’t have any problem with this. I’m going to face this pain because this is nothing compared to the alternative. I’m not a quitter because I have a vision of what this is all about. 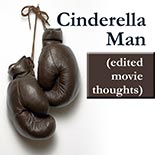