Our Response to Failure: Love Much!

Kate: You just basically said what happened to me last night. Someone has something to offer to me that I know is from God and that I know is unlike Him in my character. I care deeply, but then everything will ooze out of me. I think sometimes it’s pride, and honestly, I’m just embarrassed that I did it again. But last night I was just so sad that I had hurt other people again by being just a jerk. And I have such a hard time not beating myself up over it because I did it. I know we’re supposed to face these things with faith, and I know I could do it, but I get prideful. I always come back to the place of, “I need You. No matter if this had never come up, I’d need You just as bad. And I’ll never be anything else besides what I am without You, left to myself. Thank you for loving me again.” I should know better, but sometimes in the midst of that failure I can be so upset with myself, thinking I must not really care, I must not...

Mark: I’m glad you brought all that up, because that’s one of satan’s favorite tricks.

Kate: I know! Last night Mom said, “That’s a lie.” And I said, “I know, but it feels really true that I should be the dog right now.”

Mark: Beating ourselves up is one of satan’s favorite tricks because it’s totally unfruitful. It’s unproductive. “Unless a seed falls to the ground and commits suicide, it abides alone”? Self-flagellation is not the same as faith, and it’s not the same as repentance. There’s really a lot of pride in that. We have to humble ourselves before God, and with open hands towards the heavens say: “God, I realize I’m just stupid. I’m a vegetable. Apart from You I can do nothing.” With humble, open hands.

I had this conversation fairly recently with somebody. We’ve discussed it, I’m sure, before, and y’all have discussed it amongst yourselves. But the difference between what Judas did and what Peter did is almost insignificant—except what they did next is very significant. One hung himself and went to hell, and the other one was with John the very next time you see his name mentioned. One beat himself up and killed himself, and satan won. The other went out and wept bitterly, and immediately joined himself to Jesus and to Jesus’ purposes with humility and open hands and great gratitude for what God had done for him, in forgiving the likes of him. One walked in faith, and the other walked in unbelief. One is with Jesus for eternity, and the other—his guts spilled out as he hung himself—is with the devil and his angels. But what they actually did wrong was virtually identical. Judas didn’t even get the money. He threw it away. So, what they did was virtually identical. But the response after failing is the difference between a disciple and a loser.

Self-flagellation is what satan wants us to do. So, anything he wants you to do, do the opposite. That’s just a good rule of thumb. You know that satan wants you to beat yourself up, so you know that’s one thing you’re not going to do! That doesn’t mean arrogance, like “No big deal. The blood covers me.” No, there is a conviction. But that conviction leads to humility and gratitude.

I’ll tell you another thing it does: it makes you far more compassionate and far more wise. Compassionate, because you’ve got that extra moment when you look in another person’s eyes that’s just done something stupid and say, “I know that. I know how that happened.” It gives you that extra second, instead of being prideful and reactive and judgmental and religious, it gives you that extra second of, “I know that. Now they may choose the wrong path from here on, but I sure know how they got to this point, because I’ve been there. I could be there again in a few minutes. I know the frailty of humanity. I see it in myself when I look in the mirror in the morning, without any help from anybody.” I don’t have to fail publicly to know how weak I am. I can look in the mirror and know how weak I am. But that doesn’t discourage me! It makes me grateful. “He who is forgiven much loves much.” And it makes me compassionate, because I can look at other people and I can know that there’s something else going on there. The point is, you can actually take an extra moment to look through somebody’s eyes when your eyes are soft because of your own failures and you’re humble about it, not self-flagellating or a quitter. It gives us compassion if we can see ourselves properly and feel His grace.

It gives us wisdom because we’re not unaware of satan’s devices. Because we’ve been in middle of the war ourselves, we know a little bit of, “OK, here’s the next thing that’s going to happen. You’re probably going to want to beat yourself up! Because I do that. But I know better now, and I’m going to spare you the trouble of going down that stupid road. It’s unfruitful. You’re just going to end up depressed and mad and pull away. Then it’s just going to be twice as hard to get back to ‘John,’ after you’ve gone out and wept bitterly and then whined, felt sorry for yourself and mad, had the false humility of beating yourself up, which is really just pride. You’re just embarrassed about it. Now somebody else has seen it too, and your reputation is ruined, and bla-bla-bla. Just don’t do all that stuff, because you’re not going to like how it turns out, and you’re just going to change and repent of all that nonsense anyway. So, save yourself two or three days of being a dummy! Come on back and let’s get going again. I’m not trying to brush the sin under the rug, because it is serious. But the right response is to weep bitterly...and then go find John and start walking it out. If you’ve been forgiven much, love much. Made perfect, being made holy. This is about your training. This isn’t about your destiny. This is about your training. That’s very different!”

So, it makes us considerably more compassionate and considerably more wise. When we’ve gone through this process of dying to various sins ourselves, we can become more useful, which is the meaning of the word “holy.” Made perfect, being made holy—being set apart for God’s purposes. Being useful to God: that’s the very meaning of the word hagios. So, it’s a good thing that God takes us through this boot camp of our own foolishness and shows us the grave that we couldn’t acquire just by being committed to the grave, but only by a series of things that we could never have orchestrated for ourselves. It makes us more useful, if we’re listening. Father’s training is hard at the time, but it serves a purpose. It yields a harvest of righteousness. It yields a harvest of equipping for those who have learned from that training. So, keep our ear to the ground and keep our heart soft, and our worst failures become some of our greatest tools in the future if we’re humble enough to give God the glory for changing us. And if we get back with “John” and love much, then it can become very helpful in God’s purposes to spare other people scars that we had to encounter ourselves the hard way.

Let me just reemphasize that one point just for clarity’s sake. Beating ourselves up is not the direction to go. Caring enough to want to beat yourself up—ok, I’ll give you that one! You’ve got to care. But when you know that is the wrong thing to do... Weeping bitterly is fine. Peter did that, and that was ok. He had to face it. He heard the cock crow, and he didn’t say, “Oh, that’s ok. Jesus loves me.” No, he wept bitterly. He realized he had betrayed the Son of God. But he decided to love much rather than to go out to hang himself. It’s a decision we make. It doesn’t come easy any more than avoiding temptation comes easy. But it’s a gift we offer to Jesus. It’s the right thing to do, to love much as a statement of gratitude, and to be more compassionate and more wise and more useful as a gift to Jesus and to others, rather than beating ourselves up, which serves no purpose except to bring the enemy glory— which is not really what we were born for! 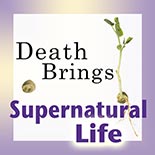