Will YOU be one? "Sons of God MANIFEST!"

You! I don’t know how much pain you’ve ever endured in your life?! You have to welcome it. You might have had some here and there, and everybody has this internal thing that goes on sometimes. But as far as something utterly devastatingly humiliating and painful, so much that you can’t even catch your breath, you can hardly even breathe, those things are part of the future, where new things are born. Apart from welcoming those things, embracing them, rather than running from them, nothing supernatural happens. We’re just couch potatoes, nice guys in a whole universe of nice guys.

I don’t think any of us, unless we’re just totally hypnotized ourselves, are content with “same old, same old.” And if not, you’ve got to be aware that something that is so devastatingly painful and so objectionable that it’s past speaking, is the only place where new things are born.

I read a book when I was probably a Christian less than a year: Let Go and Let God. I don’t know what that meant to whoever wrote it at the time, but I do know that that’s entirely accurate. And Jesus spoke those same words a thousand different ways and lived those words. He let it all go. Faithful and True! He let it all go so that He could ride a white horse and ride on wings of flame with a sword coming out of His mouth to do something no one had ever done.

Ambition and information will never change the world, only death to self will open that porthole to the Supernatural. The ones who are busy protecting ourselves and having it our own way, trying to avoid all pain, are never going to see the real thing to the extent that we could.

Here we are in October reading about it and talking about it, but on a personal level I know, on a corporate and a world wide level, it’s scary stuff to even think about what it means to be faithful and true, what it cost Him to be called that by the Father, allowed to ride that white horse and represent His Father—it cost Him to do that! That’s the invitation that all of us are entering into! That’s where Tabernacle starts. 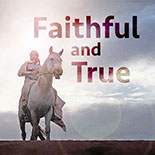