Get Lost in the Ocean...Let Go

Feeling either crummy or prideful are both so shallow. It's just absurd. It's not: “Well, I'm feeling really good about myself, that's prideful and I need to repent of pride.” or “I'm feeling really bad about myself. Oh, that's depression. That's self-abasement. That's negative. That's Eeyore. That's…” All of it is just shallow. It's just focusing on the surface of the water when there's a whole ocean that goes three miles deep. And you're missing it because you're looking at the ripples on the surface. To even think about yourself at all in those terms, for good or for bad, is just so shallow that you're going to entirely miss what's really there. Getting lost in the ocean—that is where the Life is. It's not in analyzing the surface.

Question: How does that mesh with keeping God's High Standard and turning away from sin?

Sin isn't something where “God's going to judge you if you don't stop sinning.” That's not the point. The point is your sins are your chains until you let go of the things that you've held yourself in bondage with—pride and lust and fear and selfishness and greed and apathy and laziness.

How many lazy people are happy? Zero! There's never been a lazy person that's happy, ever. Why? Why does God call you to repent of being lazy? Because He's a “hard taskmaster” and He’s trying to “get something out of you”? No! Because He knows those are the paper chains of our own making that we’ve held ourselves in bondage with. Diving down into the ocean, where His Life is, the Life-Giving Spirit, is the willingness to let go of the cheap garbage that’s holding us back.

So the supposed high standard is saying: there’s this world of illusions and temptations and all of those things are impediments to going down into the ocean and experiencing the freedom of Jesus. Why do you not let the sun go down on your anger and why do you not get into relational issues? Because your prayers are hindered, as Peter said.

“My yoke is easy.” It’s a yoke. “My burden is light.” It’s a burden. But, “Come to Me, you who are weary and heavy laden, and I will give you rest. I am the Prince of Peace.” So His supposed hard line and High Standard against sin and dealing with sin—all of those things are an attempt to get us to break through the surface that we are so focused on, in order to go down into the ocean where His Love and His Freedom are. So His supposed hard line and High Standard is an invitation: “Come, you who are weary and heavy laden. Your way isn’t working. HELLO! Let go of this stuff. You’re holding on so desperately to all this garbage, and all you’re really doing is keeping yourself from experiencing the reason you were born. You think they are propping you up, but all they are really doing is drowning you in your self-life. No freedom is ever going to be found there. You’ve got to let go in order to have LIFE. The Life-Giving Spirit can only be found on MY terms—you’re never going to get it on your terms. The natural way will never lead to anything right and good. You need to stop believing the lie that you are protecting yourself and gaining something for yourself. Moth and rust destroy. Thieves break in and steal. There’s nothing you can have here that you can hold onto anyway. So, let go!”

So, that’s the High Standard. It’s an attempt to dissuade us from the things that the natural man thinks are saving him. Go ahead. Build bigger barns for yourself. “This day your soul will be required of you, thou fool.”

Do you see? There’s a whole universe down below the surface, and He’s got to convince us to let go in order to have the very thing that we were natively created for: The Life-Giving Spirit.

For everybody in this room—BOOM—when your spirit is gone, you’re just a rotting hunk of fly-covered, maggot-covered meat. And all that happened was your spirit left, right? So the spirit that you are created to be, and this little shell that carries around your spirit, is being called by God, invited by God, to let go of the native, natural world order of things and to TRUST.

“To all who believe, rivers of Alive Water, gushing from the inner man.” To all who believe. You will see it when you believe it. That’s the whole invitation of the New Testament—to let go, to find the three miles of depth of ocean that you were created for instead of clinging to all the garbage of pride and selfishness and fear and laziness and lust (whether it’s food or whatever). To let go of all that stuff. The High Standard isn’t really a high standard at all, it’s just God trying to portray to us the Natural order of things. That all of that garbage will hinder the Rivers of Alive Water. So, let go.

Question: And what if someone doesn’t want that? If they are not walking in the Light, does that expose that they don’t have relationship with Jesus, anyway?

They can’t. Somebody might say, “Well, I have faith in God. I have a faith, but I’m not willing to let go of the world.” No, you don’t have a faith because the definition of faith is to let go. So, you can’t have faith in God and also faith in the material world and faith in our selves and desires of this present age. You can’t have both. That’s why if you love the world, you are God’s enemy [James 4:4]. It's not that it’s such a high standard, but it’s that you don’t faith. You are saved by faith, and you don’t have faith if you have to have the present age to prop you up. The two things are mutually exclusive. It is absolutely impossible that a person has faith and still loves this present age... still loves the world and the things of the world, the cares and worries of the world, the deceitfulness of riches, the deceitfulness of affirmation and human love and so forth. You don’t have faith. So, yes, you are saved by faith. Absolutely! Christ dwells in your hearts through faith. But what is faith? It’s the refusal to let this present age dominate your desires, your concerns, your priorities, your methods, your mind, your reactions, your money... It’s a refusal to let this present age dominate you. Faith is, “I’m going here. I’m going deep. I’m going all the way. I am letting go of the things that hold me. I'm letting go.” 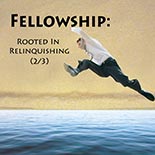