Opinions and Disagreements Amongst The Saints?

Should there be divisions or lack of harmony, or opinion-battles? No way. If Jesus wasn’t like that, then we don’t have to be either.

Question: “We have a great ‘fellowship’ and feel like there is progress towards being a Kingdom of priests instead of sitting in pews. But, it is quite disheartening that we butt heads and can’t get past ‘That’s just YOUR opinion!’ problems when we try to decide things. It doesn’t come up every day or anything, but it always hangs over us. Should we just EXPECT to have opinion head-butting that slows us or freezes us in whatever we’re discussing? I have a hard time believing that there would never be any disagreements! Everybody is different, so as long as no one gets too angry or pouts too much, it should just be expected, right? So how should we handle it when we get into these head-butting problems?”

Should there be divisions or lack of harmony, or opinion-battles? No way. You could accept them as normative. Or, you could hire someone to tell you what to believe and what to do. Or, you could ask God for HIS culture in your home, your church, and your area. The difference between man’s culture FOR God, and God’s Habitat, is difficult to explain, but let me try it this way:

Let’s say I was conversing with a man from Albania. In Albania, dipping bread in vinegar is everyday stuff, and part of the very habit of life for them (it’s not a custom in Albania, but I’m just illustrating). If an Albanian man said, “What DO you do when you get vinegar bread caught between your teeth? Isn’t that just the WORST?! What do you do when that happens?” I’d have to say that while I’m not above that happening (I don’t have superior teeth and gums and eating habits to all Albanians), it really does not happen to me. He might be amazed, since his culture has certain expectations that vinegar bread is just plain a part of everyone’s life—and so is getting it caught between their teeth. But it’s not so amazing that I don’t ever have that problem. It just plain old isn’t likely to happen to me, and I never think about it or talk about it! Why? Because I’m better? No—because in our culture, we don’t live in a way that makes that a possibility!

In such an environment where Jesus is really Leading, there is nothing that could be described as in-fighting, opinion-holding, or ongoing barriers.

It’s an established fact that a group of Believers, a church, can consist of deeply involved saints (NOT just the unBiblical “committed nucleus,” “invisible church” thing). The church can be the “mashed potatoes” of many very bright and accomplished people, from tradesmen to janitors to executives and inventors, as well as ex-“Leaders” in religious environments, as well as ex-anything-you-can-think-of in the ugliness of the pagan world. So, we have to start by saying that this isn’t just “theory” that’s impossible to live out. In such an environment where Jesus is really Leading, there is nothing that could be described as in-fighting, opinion-holding, or ongoing barriers. It is entirely possible, proven in the real world with real people, for a church to go even a decade and a half without any head butting.

I don’t know how to describe it any better than the Albanian example. To talk about it much would grieve the Spirit, so I can’t. God does good Work, and leaves NO place for men’s boasting. Yet, I know for a fact that tensions, mistrusts, stress, broken or wounded loyalties, lack of respect, confiding in some—but not being comfortable with others, opinions knocking up against each other, pooling of ignorance...ALL of that stuff is unwelcome and unnecessary. I have proof of it. If Jesus wasn’t like that, then we don’t have to be either. “Christ IN you, the hope of Glory.” If any of the stuff in that run-on sentence a minute ago peeks out its head, it is resolved so quickly that it makes satan’s gnarly head spin.

I can honestly say that “disagreements” or “disagreeable people” questions plain old don’t make any sense in God’s House, when it’s functioning properly.

I think I understand your question very well. People all over the world, I know for a fact, understand what you’re asking and why. I’m sure your situation is mild compared to many (though it is troublesome enough, I assume, to cause you to ask about it). What you described, and much worse, is ubiquitous. But, it’s not Jesus’ Way, and doesn’t need to stay that way. It’s too draining to live like that. Sure, things like Ananias and Sapphira will crop up. Simon the sorcerer, Diotrephes, Absalom, and Korah are always a possibility. But that’s very different than what you’re asking about, I assume. Even the Acts 15 thing, or the Galatians 2, or maybe the 1 Corinthians 5 thing could come up. But the 2 Corinthians 7:11 response is what we have always expected—and what you should always see, for many years, whenever anything comes up. Nothing is hanging, nothing remains unresolved or in question long, and broken hearts or disappointments or question marks about people or things or subjects are quickly laid down and resolved with one another at Jesus’ feet, together with whomever may be involved.

SO, meanwhile, back at the ranch in Albania, I can honestly say that “disagreements” or “disagreeable people” questions plain old don’t make any sense in God’s House, when it’s functioning properly. That type of question is strange to the ear of folks in a church that is functioning Well. It is just as strange as the question “Where do you attend church?” that is only a totally weird and bizarre question to an eight-year-old, or eighty-year-old, who lives in God’s Kingdom—rather than an unBiblical religious/church experience. No compute. That’s the honest truth.

It is absolutely amazing how simple life can get when everyone wants sin to be purged from their lives.

Sorry I couldn’t explain it better. But again, all around the spherical neighborhood, most folks have to try to cope with what you’re speaking of, year in and year out. Attrition is about the only solution in those cases, other than people searing their consciences with the old “agree to disagree” adage. Well, I just have to imagine (and don’t have to imagine, really) that God has a better way. The “price” for a City set on a hill, where the lion lays down with the lamb, and Simon the Zealot can easily embrace Matthew the tax collector...is really high, I suppose. Dying to self is a corporate prerequisite. Humility. Mutual love and mutual dependence. If 100% are willing to pay that price of “denying their very selves” (Jesus called such a person a “disciple,” a “christian”) we’ve begun the Journey. And when genuine heaven-sent Gifts are available to “katartidzo” (mend, prepare, equip, perfect, join, knit, restore, frame, and again mend, as in “mending the nets” for strong, united usefulness!) the saints for Works of service...the good stuff gets better. Most situations we’ve seen are collected under the umbrella of: homes instead of buildings (“we B cool”)...or this doctrine or pet idea instead of that one...or democracy instead of “clergy”...or some other thing I’m not thinking of right now because I’m sleepy. How many entire Churches LIVE around Jesus as Savior (SO needed) and Lord (SO mandatory)? Usually these Two Pillars of LIFE (Acts 2:36) are either assumed to be in each person’s life (because they’ve claimed it to be so), or these two things are not (in any practical way) necessary to be a “part” of that “group” anyway. And the involvement and relationship in daily life commanded in Heb.3:12-14 is rationalized away, so we can never even know the inner men and women around us to resolve this dilemma!

Well, when we build on a foundation of sand (sand foundation defined: faith and obedience are intellectual, or optional, or relative, or just a wild guess in those around us—Mat.7:21ff), the House starts to look a little warped and psychedelic with its lack of square corners. Eventually it collapses “when the storms come.” That’s a different picture, of course, than the House that the gates of Hell itself cannot thwart—Jesus’ House.

PS Believe it or not (BELIEVE IT!), more often than not it is some sin that blinds us from GOD’S viewpoint on anything. In other words, almost always, if we can help each other get past pride, or fear, or selfishness, or fear of man, or the wrong kind of fear of God, or...(name the sin)—we will find that those sins had caused us to not See together what God’s thought was regarding whatever is being discussed. It is absolutely amazing how simple life can get when everyone wants sin to be purged from their lives (1Jn. 3:3, 6, 9). As we get past the stumbling stones and satan’s mirrors, the ability to have “unity of the Spirit,” and “unity of the Faith” is wonderful and refreshing. 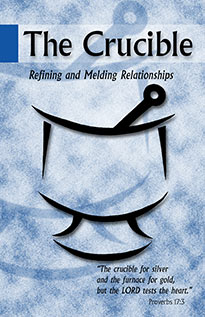