The Grave is Hope

Remember this thing we looked at a few minutes ago, “The princess is doing nothing. She could have been interceding for the saints.” What Kevin just said, I’ve seen it abused a couple of times or three. Where someone said, “Yeah, I’m weary. Isn’t someone going to sustain me?” Ever seen that? “Where is everybody when I need them? I thought everybody was supposed to be spiritual around here. I’m disappointed.”

This is about laying down your life for other people. This isn’t about you. God sustains you. You sustain others. The times I’ve been in the worst shape are the times that I’ve needed more than ever to watch and pray for others around me. God sustains me as I sustain others. Paul said that in 2 Corinthians 1. He said, “I’ve been dying. I’ve been dying a thousand deaths. I’ve despaired even of life itself, but the reason why I’m willing to endure that is so that I can fill up in you the life that I’ve given away. The pain that I’m suffering brings you Life and Joy.” That despairing even of life itself, that agony that brought him right to the place of virtual, literal death; the pain that he felt, he turned that towards other people. He hurt worse than you did or have or do, and yet he was willing to turn it into Life for others.

There’s something about that transaction of faith in our own hearts and lives that says, “I refuse to let this be inward-focused. This is not about me. I’m going to trust myself to a faithful Creator and go on doing good. I’m going to serve God’s purposes in my generation. Of course I’m going to be opposed. Of course I need to fill up in my own body the death of Christ in order that I might be useful to God and to His purposes, and to His people, and to a lost world.” Don’t think it strange when you suffer trials and temptations. Your brothers throughout the world are suffering as much as you are, and this doesn’t center around you.

When Job prayed for his friends, it says, that’s when his fortunes were restored. That’s when God could bless him is when he turned and interceded for others. The princess is doing nothing. Why? She either doesn’t see it. She’s dulled herself with the things of the world. She’s lazy as a result. Or she’s having a pity party thinking about herself, and she’s not interceding for anybody but herself.

God doesn’t work that way. If you really want to find God, He’ll save you in that condition, but He won’t prosper you in that condition because He fills us up with His power and His life when in weakness we boast in that weakness. We don’t moan in that weakness. In 2 Corinthians 12 Paul said, “I asked God to take away this pain. I wanted it gone. I asked Him three times and God said, ‘No, you’re missing the point, Paul. If you’ll go on doing My will, if you’ll go on pressing forward,’” and Paul said to the Corinthians a little bit earlier, “Curses on me if I don’t serve you guys with my life and with the Word of God in caring for you and loving you. Curses on me. Woe to me if I don’t do that.” Well, the thing that was going on in his heart was that in the process of dealing with this pain and this agony he was feeling he decided, by revelation he saw, that Christ himself was crucified in weakness, not in strength. He went on to say that in 2 Corinthians 13. No chapter breaks. It was all one thought. And what he was saying was that it’s okay to feel pain. That doesn’t mean you’re a failure. That doesn’t mean something is terribly wrong. That might just mean that God wants His power to rest on you, and He only lets power rest on those that are crucified in weakness rather than strength, lest any man boast. He doesn’t want us to be pompous and prideful, and muscle flexing, mighty, valiant soldiers.

And until we get that straight in our heart, that the grave is a place of hope, that it’s a good place to be. To boast in our weakness rather than moan in our weakness, hope it goes away so eventually I can maybe be of some use to somebody else and focus outward. No, this isn’t so it can go away so that you can eventually be of some use to someone else. It’s in the midst of that that you need to say, “God, I love you. I’m boasting in this weakness. I rejoice that my name has been written in the Book of Life. I rejoice in that fact, and I’m not going to turn back. I’m going to look for others that no doubt hurt more than I do and that need to experience your love.” In that context, He brings a word to sustain the weary. When you’re not looking out for yourself--”Will somebody please give me a word to sustain my weariness?”--but instead you’re laying down your life no matter how you feel, boasting in that weakness. Then and only then the power of Christ can rest on you. As you’re praying for your friends, God can do something special in your life.

That’s a thing that has got to turn in a lot of lives around the world. That has to turn a channel in an awful lot of lives. If I had to pick the top ten things that had to change in order for Christianity to fill the face of the earth with the glory of God, that would be one easily in the top ten, maybe in the top five. We’ve got to know what to do when we hurt. We’ve got to know what to do when we hurt. Do you turn inward, or do you turn upward and outward to the glory of God? Full force, right in satan’s face. Boasting in our weakness. Boasting in the fact that we feel like we’re dying inward, but renewed day by day as we call on the grace of God.

And, it is day by day. You don’t get a great big truckload backing into your driveway. “Now I’m okay for the next month.” It’s day to day. It’s day to day. You’ll experience God’s grace. You’ll taste the powers of the coming age. And it’ll be a little bit fleeting because as soon as this time has passed, and this opening has passed to do God’s will, to see, to care, to love, to serve, and the opening has passed, and you go home and you just want to cry, “Like, man.” And satan says you’re a hypocrite. You say, “No, I’m a servant of God. I’ve been bought by the blood of the Lamb. Here are His scars. I bear them on my own body for His sake. I boast in my weakness, satan. I don’t run from it.” I boast in it. Now, in that context God can do miracles.

We need to get it into our head what the victorious Christian, the victorious Church look like. It is not a bunch of heroes that can quote the Bible left and right all day long and can prove all of their enemies wrong. It’s people that are willing to suffer and die in humiliation, but rise up to love and to serve in the midst of their own pain. To look outward and not inward in the midst of that pain and to boast in it. Then and only then does the power of Christ rest on us. Not unto ourselves, not that I can feel like I’ve been baptized in the Holy Spirit, Glory, Hallelujah! But so other people can be touched by the grace of God. That’s what it’s unto. It’s not unto anything but that.

You take care of others. God pours out His grace on you as you pour out His grace on others. It’s not something you’re just sitting there like a big dish waiting to drink in so that you can pour out. You give out of your want. You give out of your poverty and God then allows you, a crucified person, one standing in humiliation and pain, to be able to do things that all the valiant warriors in the universe could never pull off. That’s the thing that humiliates the principalities and powers is the cross. Their triumph over on a cross (Col. 2). 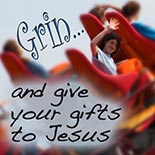