Love Is Something You Are

Some of us at dinner last night were discussing what love is and what it isn’t and the terrible temptation within us to live out of human love rather than out of God’s Love. Paul in 1 Corinthians 13 gives a pretty vivid picture of what Love is and what Love isn’t and he went so far as to say if you’re rude towards people, relationally, that you can give your body to be burned, give all your money to the poor, have enough faith to do miracles, even move a mountain and yet its of no value whatsoever. If there isn’t love than you don’t have God because God IS Love. So if you’re rude, or boastful, or judgmental, or selfish, or proud, keeping record of wrongs-if you have these qualities in your life, then everything else you could ever do is of no value at all. You don’t have God if you don’t have Love because God is Love. And on what context can you find love except in relationship? If you’re rude in a relationship, selfish in a relationship then you don’t have God because God is love and all this other stuff is just extra. What remains is Faith, Hope, and Love and the greatest of all of these is what God is and that is Love. It’s not something that you do; it’s something that you are. It’s the water in you as well as the water you swim through. It’s something you are.

So to not love (to be selfish, or rude, or proud, or keeping record of wrongs, or standoffish, or whatever would happen to be) is to vacate God. It’s like a fish flopping around on the shore drying out. Its not in the water and the water in it is evaporating and it’s just going to be a corpse, because there isn’t any way to have God apart from love, because God is love. And there isn’t anyway to have love apart from relationships. Try to love a stone wall. Try to love a chair. Try to love a book. There’s no way to be rude to a book. There’s no way to be proud for a wall. You see God drives us towards one another. And there’s no way to have God apart form abandoning our self in love to those that God has given us. Just as the Father gave the Son to the world because he loved the world and then the Son loved the world so much he died for them while they were yet sinners. He expressed his love every day of his physical life, that somehow in the context of relationship and love we can then live through the Son for the Father.

You see all these things are interconnected it’s not just a string of commands that you do, but it’s who you are. That has to be somehow defined by the love of not being selfish or prideful or rude self-centered, but somehow to abandon ourselves for the sake of others and therefore participate in God. Through the Son, for the Father. There’s a lot of ways to express this. One subject that’s come up recently has to do with the idea of authority. The Body of Christ living through the Son living through the Body of Christ. Not being able to separate or distinguish per-se, as Tim described it as well as anybody probably could. How do you distinguish between the Son of God and the Body of the Son of God?

Was it just some strange allegorical statement or did Jesus actually say, "This is my Body, this is My Blood, this is the Life of the world. I will build my church that the gates of hell won't prevail against. I have given my Body as a living sacrifice." All of these things are not just allegorical and poetic, but they actually have to do with perceiving God through loving other people and honoring those that are part of Jesus-- bought by His Blood. And loving them, as we claim to love a God we can't see, we love those that we can see. It's all terribly interconnected. Jesus did a miracle, if you remember, in one situation where He healed a blind man and He said, "How do you see? What's in front of you?" And the man said, "Well, I see men walking as trees."

I would say that a person that doesn't abandon themselves in love, and love the Body of Christ and respond to the Body of Christ through the Son of God because this IS part of the Son of God is like the blind man that only sees men walking as trees. The Body of Christ is not some separate club that is about the Son of God, but it is His Body, it is His Blood that we are washed in that flows through our veins. He is the Second Adam, we are part of Him, literally part of Him, not figuratively. Not a club about Him until He comes back, but literally a part of Him because we have been genetically translated into a kingdom of Spirit, the kingdom of Light, the kingdom of the Beloved Son. Not the kingdom for the Beloved Son, the Kingdom OF the Beloved Son. It's OF Him- the Water that is in us, the Water that we are in- it's OF Him. We are born OF God, not born for God, not born by God, but born OF God.

That's the nature of this kingdom that we are in, and if you can't see that, then you are like the blind man that only sees men walking as trees. You are not whole. If all you see is "What did God do for me? Let's see, now I'm redeemed, I have His righteousness, I have His revelation. This is for me, I'm clothed with Him and that makes me a good guy now and I'm not going to smoke and drink anymore, that makes me even better...." All of this self-centered stuff that is just about me, and I happen to belong to a club of other people that are just about themselves too until we all die and go to heaven, claim our mansions just over the hilltop (with three-acre lots, by the way, so we don't have to be too close to our neighbors). That's silly. That's never God's heart and mind. He wants to heal us, not for us to see men walking as trees. What kind of relationship can you have with a tree?

But that's how most people do the thing called Christianity, frankly. Around the world, go to whatever country you want to go to - we've seen it in a mud hut in India, as well as in a house in Australia, as well as in a house in Poland, and wherever you want to name. Men walking as tress, all the trees walk in, they sing some songs and they talk about good things and then the trees all leave. But they don't really love. They don't really connect their lives as if it were Jesus Himself. In the Water, of the Water, through the Water, part of the Water. That's not the way most people live out their lives. So, part of living for the Father through the Son involves abandoning ourselves in love, for God is love and love can only be had in relationships. There is no other way to have love except in relationships; abandoning ourselves to the Father's will in the relationships that God has united us to.

Otherwise you can be saved as men walking as trees and yet that healing is far from complete, far from being able to see the Technicolor life and liberty that God has for us. There is no way around seeing the Son of God in the Body of the Son of God and identifying with that, loving that and spending our lives every day for that as if it were true, because it IS true. You can pour a glass of water on a fish all day long, or every Sunday morning and Wednesday night, but that's a little different than living in the habitat of God's love that He has intended for us. IN His Body, In His Life, not just FOR His Life, not attending His Life, but in and through His life. 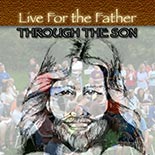