If you really want to have the inside of God’s Heart and Mind as your primary goal in life, then open up your arms and say, “Bring me suffering!”

“We must pay more careful attention, therefore, to what we have heard, so that we do not drift away. For if the message spoken by angels was binding, and every violation and disobedience received its just punishment, how shall we escape if we ignore such a great salvation? This salvation, which was first announced by the Lord, was confirmed to us by those who heard him. God also testified to it by signs, wonders and various miracles, and gifts the Holy Spirit distributed according to His will.

“It is not to angels that he has subjected the world to come, about which we are speaking. But there is a place where someone has testified:

‘What is man that You are mindful of him, the son of man that You care for him? You made him a little lower than the angels; You crowned him with glory and honor and put everything under his feet.’

“In putting everything under him, God left nothing that is not subject to him. Yet at present we do not see everything subject to him. But we see Jesus, who was made a little lower than the angels, now crowned with glory and honor because He suffered death, so that by the grace of God He might taste death for everyone.

“In bringing many sons to glory, it was fitting that God, for whom and through whom everything exists, should make the Author of their salvation perfect through suffering. Both the One who makes men holy and those who are made holy are of the same family. So Jesus is not ashamed to call them brothers. He says,

‘I will declare Your name to My brothers; in the presence of the congregation I will sing Your praises.’

“And again He says,

‘Here am I, and the children God has given Me.’

“Since the children have flesh and blood, He too shared in their humanity, so that by His death, He might destroy him who holds the power of death—that is, the devil—and free those who all their lives were held in slavery by their fear of death. For surely it is not angels He helps, but Abraham’s descendants. For this reason He had to be made like His brothers in every way, in order that He might become a merciful and faithful High Priest in service to God, and that He might make atonement for the sins of the people. Because He Himself suffered when He was tempted, He is able to help those who are being tempted.

“Therefore, holy brothers, who share in the heavenly calling, fix your thoughts on Jesus, the Apostle and High Priest whom we confess. He was faithful to the One who appointed Him, just as Moses was faithful in all God’s house. Jesus has been found worthy of greater honor than Moses, just as the builder of a house has greater honor than the house itself. For every house is built by someone, but God is the Builder of everything. Moses was faithful as a servant in all God’s house, testifying to what would be said in the future. But Christ is faithful as a son over God’s house. And we are His house, if we hold on to our courage and the hope of which we boast.

“So, as the Holy Spirit says:

‘Today, if you hear His voice, do not harden your hearts as you did in the rebellion, during the time of testing in the desert, where your fathers tested and tried Me and for forty years saw what I did.

‘That is why I was angry with that generation, and I said, “Their hearts are always going astray, and they have not known my ways.”

‘So I declared on oath in my anger, “They shall never enter my rest.”’

“See to it, brothers, that none of you has a sinful, unbelieving heart that turns away from the Living God. But encourage one another every day, as long as it is called Today, so that none of you may be hardened by sin’s deceitfulness. We have come to share in Christ if we hold firmly till the end the confidence we had at first. As has just been said:

‘Today, if you hear his voice, do not harden your hearts as you did in the rebellion.’

“Who were they who heard and rebelled? Were they not all those Moses led out of Egypt? And with whom was He angry for forty years? Was it not with those who sinned, whose bodies fell in the desert? And to whom did God swear that they would never enter His rest if not to those who disobeyed? So we see that they were not able to enter, because of their unbelief.” 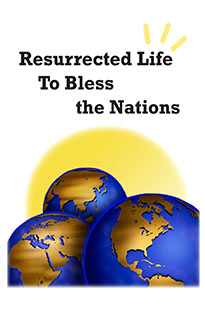