You can run all the way through the history of “Who's Who in Intelligent People” and you find people like H.G. Wells who said, “Jesus Christ was the most unique man in all of history. You couldn't possibly ever write a history of human events without giving first and foremost attention to the penniless teacher from Nazareth.” That was the nature of who this man was. H.G. Wells…who was he? But, who was Jesus? He had nothing going for Him. That's what you have to appreciate. This isn't some kind of fairy tale. The guy didn't go to college, He never had a great job, and He wasn't in elected office. He didn't even have a house that He could call His own. He had nothing. He had no money, really, and He didn't travel very much. There were no honors laid on Him. The people all around Him even rejected Him in multitudes. They walked away from Him, even His friends. One of His best friends betrayed Him. All the rest of His friends ran for the hills. Then, there was an illegal trial during which they decided they were going to sentence Him to death because they didn't like what He was saying. It grated them. He broke down the system and they couldn't stand that.

So, they decided they were going to put Him to death. There He was, hanging on a cross next to two people who were guilty. There He was, on a cross overlooking a garbage dump over the city of Jerusalem. Who was this guy? Three years was all that He verbally walked through earth and did anything—only three years. And yet, if you look back over history—even time itself is named after him, “B.C.”—Before Christ. Consider all the great armies that have come up since Jesus’ time. Consider all the great things of mankind…all the inventions, the technology, the empires that have risen and have fallen, and all the great rulers. All these things have happened, and yet still the central Figure of all history is still Jesus Christ.

Nobody calls me to be accountable for three years of Mussolini's life. Who cares? He's an historical figure, along with Shakespeare, historical figure, and Caesar, historical figure. They don't have any impact on my life. And yet, this One Person, JESUS, who only walked around for three years in a dusty corner of Palestine, (that was insignificant in the Roman Empire—nobody even cared about Him at the time), now, two thousand years later, looks you right in the eye and says, “You will give an account to me for every breath you take, for every thought you think, and for every decision you make…compromise or risk. You will give an account to me for all of those things.”

I would say that Christ was a pretty incredible historical figure, right? He has to be. Any thinking human being has to say, “What is this all about? Who is this Jesus that changed the course of history? I want to know. Show me what all this is about.” Napoleon was a wicked man. But, before he died he said, “If Cicero or Aristotle walked into the room I would rise up and give him honor. But, if Jesus Christ walked into the room, I would fall on my face and worship Him.” Even somebody like Napoleon could see that this wasn't some fairy tale. There was something more going on than that. This was something that needed to be dealt with.

If you read the four gospels, what you see of Jesus is that He came to planet earth and He didn't arrive with a big fanfare. He just walked through the crowds filled with religious skeptics and critics. The streets were filled with people who hated his guts and who were trying to trap Him in everything that He said. They set traps for Him continually to see how he would answer their questions, whether or not He was doctrinally sound. They were continually giving Him all this harassment. And yet, He dared to walk through the crowds anyway, in search of the people who were honest…in search of the people who were sincere…in search of those who had tender hearts and were really searching for the goodness and the glory of God. Jesus dared to do that. He walked out amongst them. He loved them…and He taught them…and He healed them…and He died for them. He lived His whole life for those few people that were searching. And then, He even died for those people.

Then He rose from the dead! That's something about Christianity that separates it from every other human religion. “Well, what's the difference between Buddhism and Hinduism, Confucianism?” Well, I'll tell you one primary thing. There are only four religions in all of mankind that are based on people rather than on philosophies. Confucianism says that if you live a certain way that you will find peace. Other Eastern religions tell you to get outside of yourself and forget all of your pain. Therefore, it's not there anymore. It's all a bunch of psychology. Of those four religions that are based on people, only one of them has an empty tomb of its Founder. That's Christianity! None of the others even claim to have an empty tomb. They all know where the bones lie. Or, if they don't, they wish they did. But, they never even claim that they have a risen founder.

Christianity is separate and apart from anything that man has ever devised. Man can't even comprehend those terms. Jesus Christ historically rose from the dead. Not a religious idea, but he actually did rise from the dead. Even non-believers who have tried their best to prove that He didn't are now Christians. There is a person like that living in South Bend, Indiana. This person was an atheist and worked with Madelyn Murray O'Hare. He did everything he could to prove that there is no such thing as Christ and the resurrection from the dead. Yet, he is now a Christian. In fact, he travels around the country proving to other people that it's so. A thinking person is going to realize, upon investigation, that Christ really did die, he really was raised from the dead, and there really is Life in Him. Because He died and we died, He also will give us the same Life that the Father gave Him from His resurrection. And that is something very unique about Christianity. Because He rose from the dead, because He conquered death itself and conquered satan in that death, there is Hope for us then. And that is really the only hope that we have. Again, the principalities and powers were all disarmed and now they don't have the ability to hold us captive anymore.

Turn to Colossians 2. We’ve spent several minutes talking about how we are dead in our sins. In fact a dead man in totally incapable of raising himself. Do you agree with that? A dead man can’t really do much for himself. Colossians 2:13-15: When you were dead in your sins and in the uncircumcision of your sinful nature, God made you alive with Christ. He forgave us all our sins, having canceled the written code, with its regulations, that was against us and that stood opposed to us; he took it away, nailing it to the cross. And having disarmed the powers and authorities, he made a public spectacle of them, triumphing over them by the cross. Jesus’ purpose for coming wasn’t to give us some code of ethics of how to live our lives. He came to destroy the powers in the unseen world that have conquered your soul. You were dead in your transgressions. There was nothing you could do about it. The god of this age had blinded your mind and you couldn’t even see straight any more. You counted yourself innocent. “I vote innocent. I didn’t do anything wrong. I’m as good as the next guy. Sure I should go to heaven; I have as much right to go to heaven as anybody else.” He blinded us to our own wickedness and our own wretchedness. We were dead in our transgressions and yet Christ came and in destroying the works of the devil (I John 3:8), by nailing to the cross the principalities and powers, He gave us the ability to unveil our faces. And maybe what is happening right now in your life and in your heart is you’re getting a little glimpse of Heaven. You are able to see just a little bit of the Glory of God. Your sins have made you fall short of that Glory and you had no chance. You were blind to it. But in the face of Jesus Christ we see the Glory of the Father and there is hope of resurrection. And he said that a public spectacle was made of satan and his principalities and powers were all disarmed and now they didn’t have the ability to hold us captive any more.

Don't do God any favors by signing up to be religious. You are unacceptable in your present state apart from the freedom that's in Christ. That fact has devastated the world as they have sought to find some kind of peace and strength in religion, and yet it wasn't there. Where was it? What a terrible discouragement. Religion was the last hope that they had, and it didn't work, either. That's because there is something missing. Romans 3:21, “But now a righteousness from God, apart from the law, has been made known, to which the Law and the Prophets testify. This righteousness from God comes through faith in Jesus Christ to all who believe. There is no difference, for all have sinned and fall short of the glory of God, and are justified freely by His grace through the redemption that came by Christ Jesus. God presented Him as a sacrifice of atonement, through faith in His blood. He did this to demonstrate His justice, because in His forbearance He had left the sins committed beforehand unpunished—He did this to demonstrate His justice at the present time, so as to be just and the One who justifies those who have faith in Jesus.” 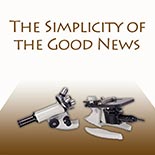