Candlelight Dinners with Him

The thing I'm wanting to kill is this religious "thing" that the way to approach God is to read your Bible and pray, that's how you lead the good Christian life, that sort of thing. The real issue isn't so much the externals of it; it's where your love is placed. Where is your affection placed? There is always going to be time for the things that are your heart.

When you were first getting to know your spouse, you never complained about spending time with her. It was something you woke up thinking about. When you were engaged there was sort of a gleam in your eye like "What's the meaning of this? How is this going to work out? This is a dream come true." There were things about it that were compelling and drawing to you, but it was based on the heart of the matter, not "I get together with my spouse every morning at 6:00. This is what I always do." That's seems so stupid, in view of love. "I always get together with my spouse at a certain time. That's what we do."

That's really the root of the issue. It is that we see Jesus as a person, and that it's not an external religious act that we do that somehow wins God's favor or makes us mature, spiritual people. That's just not true. It's seeing Him as a person and cultivating a love affair with Him, and then it's easy to pray continually as the command reads in Ephesians. That's a simple matter. Again, as far as spending time with Him, it's not just along the way on the fly. There is a place for a candlelight dinner. There is a place for that special time, and frequent devotion to special time that is shut out from all the externals and all the interruptions. Yeah, you can pray when your pumping gas and you can pray when you are driving and you can pray at work in between things, etc., but there is a place for a devotion to candlelight dinners with Him, too.

The process of being able to do that, that time that is devoted to Him out of love where you separate yourself to Him and for Him and with Him, the fruit of that is a wisdom that you could never have in a million years of just simply listening and doing and reading, etc. There is a place of a gravity of the heart, a solid, unwavering faith, the ability to enunciate why we do what we do. The ability to enunciate how we've fallen into sin and how Jesus Himself saved us. You can say that only out of theology after a Bible study and a prayer time as "Jesus saved me from my sin." But when you are away with Jesus as a person in devotion to Him and conversing with Him about these things, you can look someone in the eye and say, "I know what it feels like. I've felt the pain. I've burned –‘who among you is tempted that I don't inwardly burn.’ But I know Him in whom I've believed and I want to tell you something about Jesus. Let's get out of the religious lingo. I want to tell you that Jesus Himself can resolve these things in your life." You can speak from the gut out of your own conviction, out of your own reality, if, and only if, you've really had real time with Him and Him alone, otherwise it's just mumbo jumbo and words. To be able to enunciate where we've been, where we're going, what Jesus Himself has done for us, what we've learned from Him. The ability to enunciate those things rather than just something that we've heard that we parrot can only come from time that you've personally had with Him, and that's the cause for it, because that's the place where we really meet Him in our spirit when you commune with Him in your spirit because God is Spirit. There is no way to commune with Him except to commune with Him in Spirit, to worship Him in Spirit and in Truth. That's the only place you will find Him. So there is a time for setting apart all the physical issues of our life and only to concentrate, to only be there in Spirit with Him.

As you rise up, as you sit down, as you walk along the way, as you pump gas, as you are on the job, pray continually, ceaselessly, endlessly, and that's all true and right and good, and certainly you will always have Him in front of you if your priority system is God, if the way you make all your decisions is the Father and the Son and the Holy Ghost, if everything revolves around Him, you will pray continually. You won't have to remember to do that. If you live and move and have your being in Him, you are not going to have to continually jog your memory -- "Oh, yeah. I haven't prayed for a while." Unless you are a self-sufficient, selfish, materialistic worldly person, you won't have to remind yourself to pray, because you know that you have nothing apart from Him. So what are you going to do? You are going to ask Him for your daily bread. It's just a fact, it's reality that you need Him for every breath of air, and so prayer comes very naturally.

But there are also candlelight dinners where you are shut out from the other things. Jesus talked about doing it in a closet. He went to lonely places. There is a very important place for that time where you have shut out all of the physical elements, and now it's just you and the Father in Spirit. In doing that, you will be able to emerge with convictions that are real, and a satisfaction in your heart and soul that can't be taken away from you, and the ability to enunciate your values, and the goodness of God will come from your mouth, not just theoretically, philosophically, theologically, but the goodness of God that you've tasted out of that communion, you will be able to find words. You'll have a handle for it. "Spiritual words taught by the Spirit." How are you going to have spiritual words taught by the Spirit if you don't have any time in the Spirit? You can't. It will be spiritual words taught by Paul's letters, or by someone else's teaching or some relationship, something you've heard. But spiritual words taught by the Spirit can only happen if you are in the Spirit. The ability to walk in the Spirit means that you are not going to have a lot of other issues around you that are demanding your time --the telephone ringing, etc. I'm all for frequent candlelight dinners. I'm not for a morning “devotional time” that is supposed to somehow achieve spiritual reality. It makes a whole lot of sense that the very first thing that I want to do is spend time with the One that I love the most – Jesus. Why would I put shampooing my hair, and the job--why would I put all that stuff in front of the number one priority of my life? If He is my number one priority, if I'm sustained and held together in Him, if He's the air that I breathe, if I live and move and have my being in Him, I'm not going to just kind of squeeze Him in before I fall asleep halfway through time with Him. That isn't going to be the first time we have devoted time with one another. Probably those early morning things are a) the most uninterrupted time of our day. There aren't a lot of people that are going to interrupt you at six in the morning. That makes it very valuable; b) it speaks of your priorities. The thing that you do first is usually the thing that is most important to you. That speaks of the foundation of your day being Jesus if that's where you want to go with the beginning of your day.

But it has to do with love again, and foundational life with Him. It doesn't have to do with having a prayer and Bible reading time to start the day. That's the distinction. It might even look the same to someone on the outside. But the heart of the matter cannot be “Six o'clock every morning I'm with my spouse." That's cheap. That was never the intention, that was never how Jesus spent time with Father. He wasn't on some kind of schedule. But it was a persistent, driving thing with Him. It was the most important thing in His life. Before He named the twelve men He was all night with the Father. We should be as likely to be able to do that as be with Him in the morning, if it's real. It's not limited to that. It's the whole of our life. We should as likely stay up all night praying as simply have the time in the morning with Him. I'm not speaking of less than, I'm speaking of a life that's filled with, that will frequently because it's uninterrupted time usually, find its way in the morning as a foundation of the day that we are about to lead. We wouldn't even dare step into the arena of temptation and frustration and complexity and busyness apart from food from Heaven. You are going to have to have your bread to have your strength for the day. It's not a gimmick, but it comes out of love and a foundational recognition that He is my life that those things come out of. 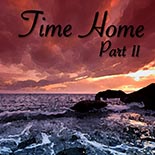