Worship: What You Pay Homage To

We think about how foolish it must have been to worship those rocks and those carved statues, how stupid to bow down before them and worship those things. When we were in Bombay, India, I remember looking out of the hotel window and saw an ox cart with a bunch of candles and a statue on it. People would come up and put fruit and little gifts in front of the cart to the statue, and that was their worship. When you think about the song “The reason I live is to worship You”, that as we truly worship Him everything else fades off into the distance and doesn’t mean anything. Worship isn’t so much necessarily singing songs to a stone or singing songs to a piece of wood versus singing songs to God, worship is that thing that you pay honor to. That thing you bring sacrifices, you bring gifts, you pay attention to, you think about. The church of satan, which has its headquarters in California,(there actually is such a thing). One of their credos is that it’s not about worshipping the devil, it’s about being selfish. That’s how they term, that’s how they describe satan worship, as selfishness. That connects you with the dark world. Not that there isn’t one, but that’s how you get there. It’s not by finding a statue of satan with horns and a pitchfork and worshipping it. How you get into the dark world is selfishness. What thing you pay homage to, what thing you give gifts to, what thing you are thinking about all the time is that which you worship.

That’s why that song makes so much sense, that everything fades off into the distance when you are worshipping God. That thing just doesn’t mean anything to us anymore because our energy is in giving gifts to God. It’s in paying homage to God. It’s in being and giving the gifts of our life, of our heart and mind and flesh and finances and all those things, that’s the thing we lay before God. We can instead be idol worshippers, if you will, not because there is a stone in the corner that we worship, or a Hare Krishna thing or a Buddha fat doll or something like that, but it’s what gifts we give, that’s what we worship. It’s what things consume our mind. If it’s interior decorating and clothing and vanity of various kinds, or plans or desires or - what things we give gifts to, those are the things that we are worshipping. The things that we pay homage to with our thoughts and our minds and our desires and our time - those are the things that we are worshipping.

I want to take the opportunity to make sure we remember how practical it is to worship God versus worship idols. It’s not really any different now than it was then. We are not that much brighter than they were. It’s just that it expresses itself differently. It is certainly within our capacity to worship something other than God by the way we place our priorities. What is grumbling and complaining about? It certainly is lack of faith, but it’s also about having a priority other than Him. Something that is self-serving, rather than God-serving. What if there were giants in the land but he wanted them to go there? So what? Go there, get killed. If that’s what it takes, that’s fine. We are talking about a billion year life ahead of us anyway, what difference does it make? Their focal point was very self-centered. They were worshipping themselves rather than worshipping God, because they had fear in their hearts. They had desire for pleasures and things that were self-centered. They were worshipping themselves. They weren’t any better off than all those idol worshippers in Philistia and those other places because they had just decided to worship themselves rather than worship God. That’s where they were laying the gifts - at their own feet. What they wanted is what they wanted. It wasn’t what God wanted.

A God-seeking servant, one that is worshipping Him, those other things fade into the background, because frankly even their human lives don’t matter. Who are these people before the throne of God? These are the people that are here by the blood of the Lamb. They are here because they testified about who Jesus was. It came out of their mouths to other people who Jesus was and what he does for men. And they are here because they love not their lives even to the point of death. They didn’t love themselves. They didn’t worship themselves and their desires and their plans. They only wanted what God wanted. So yea, there are giants in the land - it isn’t just the faith of believing that God can conquer those giants. It’s even simpler than that. It’s “does God want me to do this or not?” That’s all that matters. Shadrach, Meshach and Abednego said, “God can deliver us from this fiery furnace, but if not, hey, what difference does it make? I’m still going to obey him. It doesn’t matter what the outcome of this thing is.

That is truly God worship, where everything fades into the background. We don’t care what else happens. All we want to know is what pleases Him and everything is laid at his feet. The consequences are really irrelevant. We are in this for the billion years and our worship is in him. We are lost in him as opposed to worshipping ourselves. Another one of the roots of grumbling and complaining isn’t just not believing God’s promises, but it’s to put ourselves above God in terms of what we serve, what we worship, what we pay attention to. The things that matter are about us, not so much being consumed with what matters to Him. So the peace that transcends understanding comes because really there aren’t any other issues at stake. There is nothing but his desires and his pleasure at stake, so you can afford to have peace. You don’t have to worry so much about these other temporal matters. It’s not that you don’t work hard at them and do the right thing on the job and all of that, it’s not that you are careless, it’s simply that there is not so much ego and pleasure and other things invested in the whole thing that we just miss the peace that transcends understanding because we are worshipping him. All things fade into the distance, into the dusk of human life when we are looking full in the face of Jesus that things don’t so much control our lives. 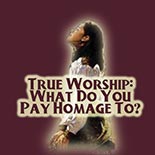