"I wept and wept because no one was found who was worthy to open the scroll or look inside.

"Then one of the elders said to me, “Do not weep! See, the Lion of the tribe of Judah, the Root of David, has triumphed. He is able to open the scroll and its seven seals.”

"Then I saw a Lamb, looking as if it had been slain, standing at the center of the throne, encircled by the four living creatures and the elders. The Lamb had seven horns and seven eyes, which are the seven spirits of God sent out into all the earth." 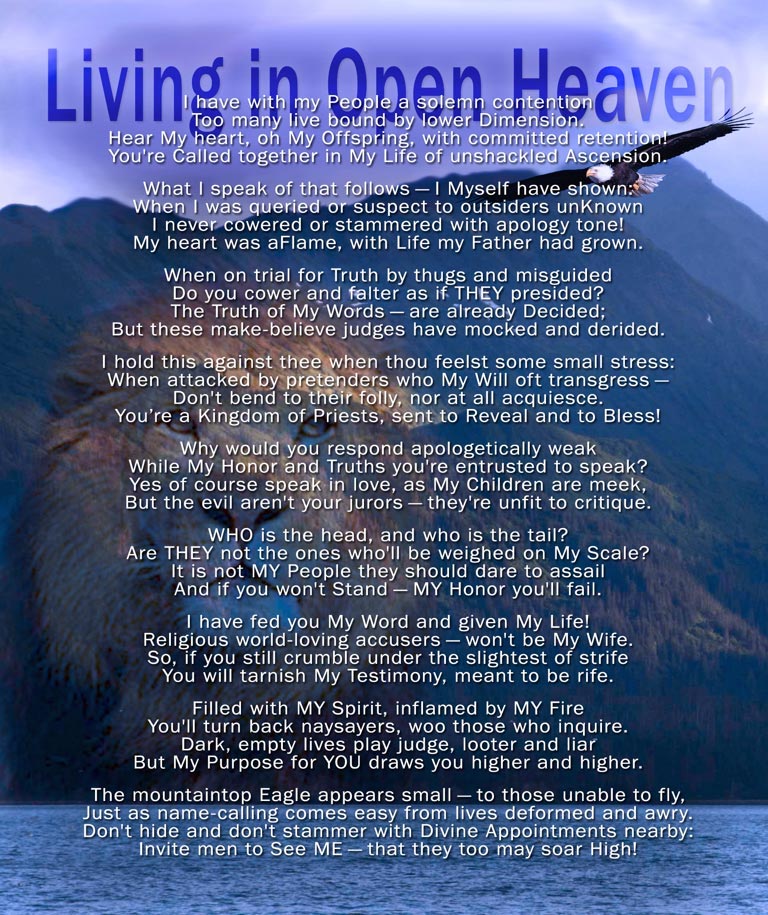 I have with my People a solemn contention

Too many live bound by lower Dimension.

Hear My heart, oh My Offspring, with committed retention!

You're Called together in My Life of unshackled Ascension.

What I speak of that follows - I Myself have shown:

When I was queried or suspect to outsiders unKnown

I never cowered or stammered with apology tone!

My heart was aFlame, with Life my Father had grown.

When on trial for Truth by thugs and misguided

Do you cower and falter as if THEY presided?

The Truth of My Words - are already Decided;

But these make-believe judges have mocked and derided.

I hold this against thee when thou feelst some small stress:

When attacked by pretenders who My Will oft transgress -

Don't bend to their folly, nor at all acquiesce.

You're a Kingdom of Priests, sent to Reveal and to Bless!

Why would you respond apologetically weak

While My Honor and Truths you're entrusted to speak?

Yes of course speak in love, as My Children are meek,

But the evil aren't your jurors - they're unfit to critique.

WHO is the head, and who is the tail?

Are THEY not the ones who'll be weighed on My Scale?

It is not MY People they should dare to assail

And if you won't Stand - MY Honor you'll fail.

I have fed you My Word and given My Life!

So, if you still crumble under the slightest of strife

You will tarnish My Testimony, meant to be rife.

Filled with MY Spirit, inflamed by MY Fire

You'll turn back naysayers, woo those who inquire.

But My Purpose for YOU draws you higher and higher.

The mountaintop Eagle appears small - to those unable to fly,

Just as name-calling comes easy from lives deformed and awry.

Don't hide and don't stammer with Divine Appointments nearby:

Invite men to See ME - that they too may soar High!