Extra-Biblical is a bad idea! Let’s not play games with the Scriptures to justify something God has not justified.

My question is this: I was watching the video you guys made on Dec. 31, 1993 to answer questions from people, and something you said didn’t make sense to me. You were commenting on church structure and organization in reference to the cell church or cell group movement and you said that some people use the example of Moses and Jethro to justify their way of building. This is where Jethro counseled Moses to delegate responsibility because too many people were coming to Moses to solve their problems. You said that people today take the advice of a pagan priest (Jethro) and apply it to church structure.

While I don’t agree with the way most evangelical churches structure themselves, I don’t see anywhere in scripture where the Lord or the apostles condemn what Moses did. It seems to me that the Bible is clear that Jethro’s advice was wisdom for Moses in that situation.

Please elaborate on how you came to the conclusion you did, or if you hold a different view now, to explain that instance in Scripture. I did find it disturbing that you condemned something that the Bible does not. It seems extra-biblical to me, but I don’t want to miss something or be ignorant. I really appreciate you taking the time to answer this. I also appreciated the sacrifice you made to come to see us a few years ago…

Hi… Good to hear from you. Of course I do remember you. : ) I’m delighted to hear that you are in relationship with other godly people (of course!), and particularly that Father has blessed you with a godly man in your life, up close! That’s wonderful!

In partial answer to your question, I guess I would have to say that you sort of have it backwards! : ) To try to create “cell groups” out of the advice of a demon-worshipping (Midian) “priest” IS, in fact, very “extra-Biblical”! Whether Moses had some stress relief from that matter or not isn’t relevant, really.

We surely would be in danger of great sin against God and the Bible to say that Jethro’s advice to MOSES 3500 years ago is now some kind of “pattern” we can follow for a New Testament Church!

God allowed all sorts of things that He did not author and was not pleased with. King David was a good guy in most respects, and “after God’s Heart,” but having a King was very much against God’s Will. “They have rejected Me!” says the Lord. Does a good result out of David’s Kingship mean that God is now pleased with that “administrative addition” to Israel’s Life? A thousand times, NO! Of course not. If God saw fit to relieve some stress from Moses based on the demon-worshipping “priest’s” advice, that’s okay with me. “Advice” even from Nebuchadnezzar (God calls him, “Nebuchadnezzar, My servant!”) can work out fine, but we surely can’t take something totally unrelated from the Old Testament (“kings,” or Jethro’s advice to Moses) and make it into a “pattern” for a New Testament Church??!!! WOW!! How incredibly “extra-Biblical”—as you put it!!!!

To justify totally unrelated issues in the New Testament—is a man-made game with the Word of God.

I’ve even heard recently the ridiculous man-made rationalization that because Jesus had people sit in 50s and 100s (so that there would be rows between people to walk in, presumably, as he fed the 5000, and that passing food short distances in a smaller group rather than across a thousand laps)…is reason to break a New Testament Church into “small groups” or “cells”—or a so-called “house-church” should “split” when it reaches those numbers. HOW ABSURD!!! That circumstance of feeding people in a crowd has nothing to do with the Way God builds in His Church! If we want to feed people fish that way, it has merit, though surely it would not be the “official way” to feed people fish. But it has nothing whatsoever to do with new testament church—to create rows and files and aisles to walk in when we are feeding 5000 hungry people in a field! It is turning the Bible into a game to suggest that this is “how to structure a church.” How “extra-Biblical”!!!!!!!!!! NEVER does the New Testament Church, led by the Spirit and the Apostles of Jesus, play such games!!

There is no hint of such Freudian practices in the book of Acts, and the letters from the Apostles and Servants of Jesus, as they Record the Life of God in His People! To apply Jethro’s advice to Moses this way—to justify totally unrelated issues in the New Testament—is a man-made game with the Word of God. There is no “Moses” in the New Testament, anyway! That is a faulty paradigm to begin with! The “pastoral system” is totally “extra-Biblical” in every regard.

So, here’s the deal… My entire point (I had hoped!) was that it is extra biblical to claim that Jethro’s advice is from God when the Bible does NOT say it is. It is far worse than extra-Biblical (in addition to still being extra-Biblical) to turn that into some man-made administrative structure for the CHURCH 3500 years later! So, I’m with you on being opposed to extra-Biblical! I haven’t seen that video in many years, but that is what I was trying to communicate (with my 102+° fever at the time : )): “Extra-Biblical is a bad idea! Let’s not play games with the Scriptures to justify something God has not justified. He has not authorized such an administrative game for His People in a New Testament Church! He didn’t even authorize or use it for the judges, or the kings—let alone for His Church!”

Well, I hope that clears it up. I am certainly opposed to “extra-Biblical” as you can see. And I apologize if I wasn’t thorough enough on that tape (6 1/2 hours was plenty for me, but not nearly enough to thoroughly deal with every issue that comes up!), but I surely didn’t mean to imply that “extra-Biblical” is okay. That was the very point I was opposing at the time, I had hoped. Again, sorry for not communicating well! I always try, prayerfully, even in tears, to be as clear as I can be, but obviously fail at times, I am disappointed to say.

All of that aside, again, I’m delighted to hear of the changes Father has brought into your life to prosper you. Awesome. Keep in touch as you are able or inclined!

In His Peace and Grace, and prayer for you and all of those around you and your son and husband (Greet them all for us, if you can!). 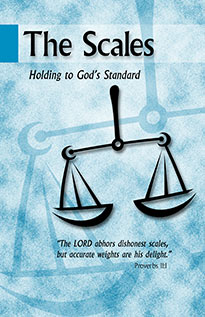