There have been a number of things that have happened recently that have reminded me that we must have some backbone about what Jesus has said.

If you’re not in tune with God, and if you don’t have a fire in your heart and in your bones about what Jesus has said about things, then you will be shipwrecked. What is Truth? How do we make decisions? What is the basis of a decision? How do we judge issues in life? Is it based on intellect? Good looks? Nice personality? “Well, they’re sincere.”? No, that is not it.

Do you realize that satan himself masquerades as an angel of light and his servants masquerade as servants of righteousness? A good masquerade always exhibits a lot of “righteousness”, a lot of “sincerity”, a lot of “humility”, and a lot of good talk, smiles and warm fuzzies. It’s not a very good masquerade if it doesn’t involve those things. Do you think satan’s a fool? Do you think satan’s so stupid that he’s going to let us see his terrible, angry, hostile nature? Occasionally, he’ll do that to see if he can intimidate us, but by and large, what the Holy Spirit prophesied through the apostle Paul was that we would be deceived and fooled by those who masquerade as righteous people. Servants of righteousness. Servants, you know, good-hearted, warm, wonderful people.

“Who’s a Christian and who’s not a Christian??” We have to let Jesus define that and never alter his definition. If you change his definition in order to protect your own reputation, your own sympathies, or the sin in your own heart that you don’t want exposed, then you are in for trouble. That is compromise, sin, and lukewarmness in your heart. And if, because of that sin, you decide you’re going to create a new standard for everybody else, then there’s going to be even more serious problems.

If you’re not in tune with God and His Spirit, and if there’s sin buried in your own heart and life or you’re compromising, then you’re going to end up betraying Jesus again, just as he was betrayed in the first century. “Crucify him. He’s unscriptural, you know?” That’s what is going to happen and you’re going to be a partaker in that. You’ll be just as guilty as the men that drove the nails into Jesus’ hands. I have to say that because, if we’re not honest about our sin now, we won’t be ready to take a stand later. If you’re not sharp right now, it’s probably because there is sin in your own life.

God just clouds the eyesight of those who wander away from a pure heart, a good conscience and a sincere faith. Because there’s sin in their own heart, they don’t have that edge anymore. Yet, they “confidently affirm .” They have opinions about things. They’re bold and arrogant and they’ll stick their face right up in yours and be bold about what they think they know, but they’ll be way off track. They’ll end up crucifying Christ afresh and harming His purposes.

Make sure your own life is right. We must be willing to deal with the compromise in our own heart and life and risk going out on a limb. There have been corners cut. I can see it in myself, and I see it too clearly around me. And the consequence is we’ve got a soft belly that we mustn’t have if we’re going to be able to deal with things rightly - to be able to really handle the things that are going to come upon us. There are going to be subtle and incredibly tricky sorts of things that satan will throw at us.

A couple of us were talking last night about the fact of this thing called the “mark of the beast”. Whatever in the world that might be, and there’s been a thousand theories about that, rest assured, there’s going to be a tremendous amount of pressure. It won’t be just pressure to conform to the world in terms of the lust of the flesh, but it will be a subtle deception that involves our spiritual integrity. Your ability to discern according to the Spirit is of grave importance.

An Anointing on YOU that is REAL and Not Counterfeit!

The anointing that John said is on you that’s real and not counterfeit, that allows you to learn and to discern things is essential. It’ll take an anointing on your life, not your mind, to be able to handle the things that are still coming. You’re going to have to be able to smell in your spirit what is Christ and what is not Christ. You’re not going to be able to use your mind to discern all the subtle things that satan is going to throw at you. You’re not going to be able to figure it out. There are too many “sweet” smiles. There are too many masquerades. If you won’t discern, and learn to discern, and then act on the conviction of your discernment in your spirit, with energy. . . if you won’t do that, then you will be shipwrecked. You’ll end up hurting others as well as harming yourself and your family.

You can’t allow soft spots in your armor. You’ve got to deal with those things. And you won’t have any soft spots if the sin is dealt with in your own life. That’s the key. You need to have a pure heart, good conscience and a sincere faith. If you’re conscience is tainted, it will not matter what you say or what you think or how strong your desires are. If your conscience is tainted by some relationship that you’re not dealing righteously with, by some issue at work, or some personal habit; if you’re conscience is tainted in any way, then no matter how strong your mind is and how strong your convictions are in your mind about the Word of God and what’s right, it will get twisted and perverted and you’ll end up thrashing and hurting yourself and others too. A pure heart, a good conscience and a sincere faith. Those things are absolute essentials in order to have your armor secure, in order to ward off the twisted, perverted, and carnally sensitive attacks that the enemy is going to be throwing.

So, be on your guard. I’m not trying to scare you in the sense that satan can overwhelm you and run you off and there’s nothing you can do about it. It’s nothing like that. I’m not saying that! What I’m saying is you need to make sure that nothing like that happens. Satan is just one of the fallen angels, the leader of the pack certainly, but still he’s no match for God. So, on that level there’s really nothing to worry about. But if you’re not aware of the enemy’s devices and you give yourself over to those devices, then you’ll be manipulated by them and really hurt yourself and others, too.

“Today if you hear His voice, harden not your heart.” 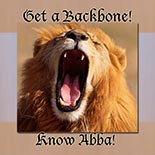