Not Just Laying Aside Pennies

If it’s okay, I wouldn’t mind just sharing something I was thinking about really quick. I kind of ran out of time. It’s about when Dad was talking about the sacrifice involved with maturing and growing into young men. There’s a picture that I’ve thought of recently from the movie, “Up.” It’s just something that I think of in terms of the sacrifice involved. It had to do with, in that movie, in the beginning Carl makes a promise to Ellie that he’s going to take her down to South America. And he never—while she’s alive—he never quite gets around to it. They’re saving pennies and all this kind of stuff, trying to make it so they can afford to get down to South America. So he promised her that, and in the movie they try to make it have a happy ending and stuff, but really, he never really fulfilled his promise.

But at the end of his life, he gets desperate for himself, and he realizes—for some reason, he gets the idea that he actually can get to South America. It wasn’t the sacrifice of putting aside the extra pennies, but just leaving everything else behind. You see what I’m saying? There was just a different attitude that he had at the end of his life that I know is the attitude I want to have now. I don’t want to wait. Something more than just laying aside pennies for God. 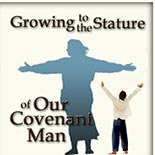