No Longer Subject to Four Dimensions

And I think something about understanding that and something Andy said in his prayer kind of brought that to the forefront of my mind. That prayer isn’t just this futile effort to verbalize something in hopes that God, somewhere out there, might actually listen. But it’s forcefully penetrating through the third dimension, the fourth dimension, and presenting in the fifth dimension something before God’s throne in the sixth dimension. And He gave you the ability to do that, if we’ve got the faith to accept it and receive it. That’s why shadows can heal. That’s why walking on water is possible. That’s why raising the dead makes sense. It’s not just a far-off God and some interaction with some pathetic little creature that’s a little bit better than a puppy dog that might go to heaven some day. There are gifts that He’s presented to us for those who have the faith and the vision to be able to apprehend and utilize those things.

So, they don’t emanate from us. They’re not, in the sense of being little toys and gimmicks and games for us to play with for our own use. But they are real. If we have the mind of Christ and lose ourselves into Him, then “greater works than these shall you do” is a very real promise that isn’t just based on a hope and flinging some vain prayer up in the air and hope the wind catches it and takes it all the way to God some place who might actually do something from afar.

There’s a participation with God in these things, if we’ve got the faith to be able to apprehend it. “For all who believe rivers of living water will gush from the inner man.” For all who believe. Not just superstars. But people that have God living inside of them and actually accept and believe that we are not subject to the laws of the seen third dimensional world. The laws of physics are just a nuisance to us, not the controlling factor of our lives. So, just kind of ponder that the next time you pray. That these aren’t just some words that you are using self-discipline to force out of your mouth or mind and hoping you can get them up past the ceiling fan before they blow back down again. 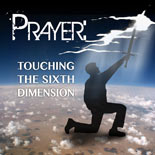