Spring Is A Beautiful Season... :) 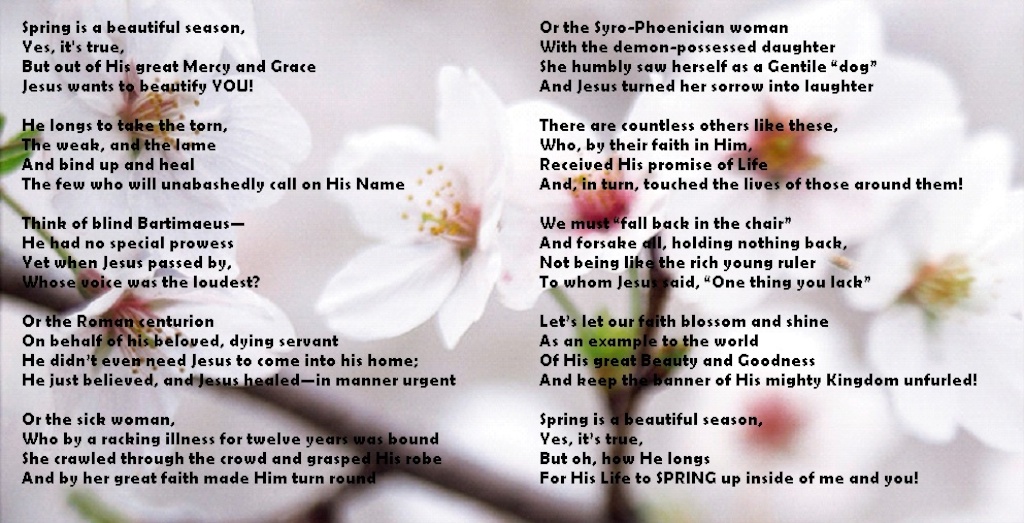 Spring is a beautiful season, Yes it's true, But out of His great Mercy and Grace Jesus wants to beautify YOU! He longs to take the torn, The weak, and the lame And bind up and heal The few who will unabashedly call on His Name Think of blind Bartimaeus- He had no special prowess Yet when Jesus passed by, Whose voice was the loudest? Or the Roman centurion On behalf of his beloved, dying servant He didn't even need Jesus to come into his home; He just believed, and Jesus healed-in manner urgent Or the sick woman, Who by a racking illness for twelve years was bound She crawled through the crowd and grasped His robe And by her great faith make Him turn round Or the Syro-Phoenician woman With the demon-possessed daughter She humbly saw herself as a Gentile "dog" And Jesus turned her sorrow into laughter There are countless others like these, Who by their faith in Him, Received His promise of Life And, in turn, touched the lives of those around them! We must "fall back in the chair" And forsake all, holding nothing back, Not being like the rich young ruler To whom Jesus said, "One thing you lack" Let's let our faith blossom and shine As an example to the world Of His great Beauty and Goodness And keep the banner of His mighty Kingdom unfurled! Spring is a beautiful season, Yes, it's true, But oh, how He longs For His Life to SPRING up inside of me and you!