Ten Shekels and a Shirt (Part 4)

What about you? Why did you repent? I’d like to see some people repent on Biblical terms again. George Whitefield knew it. He stood on Boston Commons speaking to twenty thousand people and he said, “Listen, sinners: you’re monsters, monsters of iniquity! You deserve hell! And the worst of your crimes is in that, criminals though you’ve been, you haven’t had the good grace to see it!” And he said, “If you will not weep for your SINS and your crimes against a Holy God, George Whitefield will weep for you!” That man would put his head back and he would sob like a baby. Why? Because they were in danger of hell? No! But because they were monsters of iniquity who didn’t even see their sin or care about their crimes.

You see the difference? You see the difference? The difference is, here’s somebody trembling because he is going to be hurt in hell, and he has no sense of the enormity of his guilt, and no sense of the enormity of his crime, and no sense of his insult against deity! He’s only trembling because his skin is about to be singed. He’s afraid. I submit to you that whereas fear is as good office work in preparing us for grace, it’s no place to stop. The Holy Ghost doesn’t stop there. That’s the reason why no one can savingly receive Christ until they’ve repented. And no one can repent until they’ve been convicted. And conviction is the work of the Holy Ghost that helps a sinner to see that he is a criminal before God and deserves all of God’s wrath, and if God were to send him to the lowest corner of a devil’s hell forever and ten eternities, that he deserved it all and a hundred-fold more—because he’s seen his crimes.

This is the difference between 20th century preaching and the preaching of John Wesley. Wesley was a preacher of righteousness that exalted the holiness of God. And when he would stand there with the two to three hour sermons that he was accustomed to deliver in the open air, he would exalt the holiness of God, and the law of God, and the righteousness of God, and the justice of God, and the wisdom of His requirements, and the justice of His wrath and His anger. And then he would turn to sinners and tell them of the enormity of their crimes, and their open rebellion, and their treason and their anarchy. The power of God would so descend upon the company that on one occasion, it is reliably reported that when the people dispersed, there were eighteen other people lying on the ground utterly unconscious, because they’d had a revelation of the holiness of God, and in the light of that they’d seen the enormity of their sins. God had so penetrated their minds and hearts that they had fallen to the ground.

It wasn’t only in Wesley’s day. It was also in America—New Haven, Connecticut, Yale. A man by the name of John Wesley Redfield had continuous ministry for three years in and around New Haven, culminating in the great meetings in the Yale Ball—the first of the Yale Balls, back in the 18th century. The policemen were accustomed during those days, if they saw someone lying on the ground, to go up and smell his breath. Because if he had alcohol on his breath, they’d lock him up; but if he didn’t, he had “Redfield’s disease.” And all you needed to do if anyone had “Redfield’s disease” was just take him into a quiet place and leave him till he came to. Because if they were drunkards, they just stopped drinking. If they were cruel, they stopped being cruel. If they were immoral, they gave up their immorality. If they were thieves, they returned what they had. For as they had seen the holiness of God and seen the enormity of their sin, the Spirit of God had driven them down into unconsciousness because of the weight of their guilt. Somehow in this overspreading of the power of God, sinners repented of their sin and came savingly to Christ.

But there was a difference! It wasn’t trying to convince a GOOD MAN that he was in trouble with a BAD GOD! But it was to convince BAD MEN that they had deserved the wrath and anger of a GOOD GOD! And the consequence was repentance that led to faith and led to life. Dear friends, there’s only one reason, one reason for a sinner to repent. That’s because Jesus Christ deserves the worship and the adoration and the love and the obedience of his heart. Not because he’ll go to heaven.

If the only reason you repented, dear friend, was to keep out of hell, then all you are is just a Levite serving for ten shekels and a shirt. That’s all! You’re trying to serve God because He’ll do you good. But a repentant heart is a heart that has seen something of the enormity of the crime of playing God and denying the just and righteous God the worship and obedience that He deserves. Why should a sinner repent? Because God deserves the obedience and love that he has refused to give Him! Not so that he’ll go to heaven. If the only reason he repents is so that he’ll go to heaven, it’s nothing but trying to make a deal or a bargain with God.

Why should a sinner give up all his sins? Why should he be challenged to do it? Why should he make restitution when he’s coming to Christ? Because God deserves the obedience that He demands!

I have talked with people that have no assurance of sins forgiven. They want to feel safe before they’re willing to commit themselves to Christ. But I believe that the only ones whom God actually witnesses by His Spirit are born of Him are the people—whether they say it or not—that come to Jesus Christ and say something like this: “Lord Jesus, I’m going to obey You and love You and serve You and do what You want me to do as long as I live, even if I go to hell at the end of the road, simply because YOU ARE WORTHY TO BE LOVED AND OBEYED AND SERVED, and I’m not trying to make a deal with You!”

There is only one reason for you to go to the cross, dear young person. And that’s because until you come to the place of union with Christ in death, you are defrauding the Son of God of the glory that He could get out of your life. For no flesh shall glory in His sight. And until you’ve understood the sanctifying work of God by the Holy Ghost taking you into union with Christ in death and burial and resurrection, you have to serve in what you have. And all you have is that which is under the sentence of death: human personality, human nature, human strength, and human energy. And God will get no glory out of that! 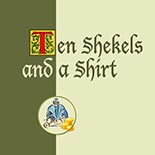