“Joined and knit together by every supporting ligament” .....

“The whole Body fitly joined together, and compacted by that which every joint supplies” .....

“Now the multitude of those who believed were of ONE heart and ONE soul; neither did anyone say that any of the things he possessed was his own, but they had all things intertwined” .....

“May the God who gives endurance and encouragement give you a spirit of unity among yourselves as you follow Christ Jesus, so that with ONE heart and mouth you may glorify the God and Father of our Lord Jesus Christ” .....

“Loving one another, and working together with ONE heart and purpose”.....

When the Body of Christ (no matter how diverse each individual may be) is “compacted together” in daily Together-Life in a local Assembly, when they are TRULY ONE in dealing with the burdens, temptations, joys, and decisions of life—as God Commands and Empowers—when they are truly, practically, observably ONE “as Jesus and the Father are One,” from “the least to the greatest,” and can say with their Master, “When you’ve seen them, you’ve seen me”......

“THIS IS HOW ALL MEN WILL KNOW YOU ARE MY DISCIPLES!”

Here’s something to ponder over your next cup of joe: the physics of a humble bag of coffee grounds still holds surprises for scientists.

Dec. 4, 2002:  Perhaps you wonder about it—just for a moment—each time you open a fresh brick of vacuum-packed coffee to make that coveted morning mug.

Remarkable, you might think to yourself, how hard and strong the brick is before the “ ssss ” sound of cutting it open, and how quickly it becomes soft and pliable afterward. It’s as if the coffee grounds themselves have transformed-a solid one moment, a powder the next.

Above : The morning coffee may be a simple pleasure, but it’s also complex physics!

Why does this happen?

Coffee grains have jagged irregular shapes. (Look at some through a magnifying glass and you’ll see.) In a vacuum-packed bag, the pressure exerted inward by the atmosphere squeezes the coffee grounds from all sides; their odd shapes interlock to help hold them in place. Because each particle fiercely resists motion, the brick of coffee as a whole will be rigid. When the bag is opened and the pressure relaxes, the coffee grounds can tumble and flow like a powder.

Simple. Yet physicists cannot predict from theory exactly how hard a vacuum-packed bag of coffee should be … or when it will change from a solid to a powder.

There’s no mystery to an individual coffee ground. We can readily determine its chemical composition, its jagged shape, its density, its crystal structure, and so on. Individual grains are not the problem. It’s the millions of individual grains rubbing together that are so hard to predict.

Coffee is an example of a granular material—substances that are as common as the sand beneath your feet, but which have no complete physical theory to describe their behavior. NASA is interested in granular materials for several reasons:

“It’s likely that large amounts of granular materials will have to be processed in order to provide oxygen and fuel for humans on Mars and the Moon,” explains physics professor James Jenkins, a NASA-supported researcher at Cornell University. “Also granular flows are important in the formation of geological features such as dunes and avalanche deposits seen on distant planets and moons. A better understanding of grain flow could provide an indication of the conditions under which those features were formed.” Planetary rings are granular, too, and astronomers would like to understand them better as well. 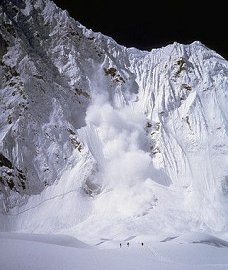 Above: Mt. Everest avalanche. A royalty-free image from corbis.com.

“Granular flows are ubiquitous on Earth,” adds Jenkins. “Avalanches of rock and granular snow are two examples. Flows of granular materials that resemble avalanches are important in coal-fired power plants, in the manufacture of pharmaceuticals, in the processing of aluminum, and in the production of plastics from pellets. It’s hard to think of an industry that does not employ a granular flow during some processing operation.”

Unfortunately, the physics of granular materials doesn’t boil down to simple equations as easily as some other phenomena. The helium in a balloon, for example, is also made of many millions—in fact, billions of trillions—of particles. Yet one simple equation governs all of its important traits: pressure, volume and temperature. (Remember “PV=nRT” from high school physics?)

The difference is that the helium atoms are widely separated (on a molecular scale). One helium atom is mostly identical to any other. There are no irregular edges or complicated atom-to-atom interactions. It really is simple.

****In a bag of coffee, however, the grounds bump, rub, and press against each other. Each grain is unique and it interacts strongly with its neighbors. Because these interactions can’t reasonably be ignored, the coffee must be considered as more than just the sum of its parts. Instead, it is the sum of its parts plus their interactions!**** 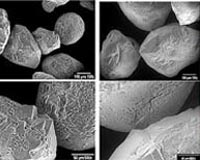 Computers are ideal for solving such problems, but there’s a snag: There are enough interactions in a single bag of coffee to overwhelm a supercomputer.

When scientists and engineers need to deal with granular materials like soils and powders, they usually approach the problem empirically—that is, they measure how the material behaves in real life and make predictions accordingly. But the empirical approach is limited to things easily measured. Some things aren’t. For example, what triggers avalanches on the Moon? How much soil can flow down a chute on Mars? Or, right here on Earth, what happens to damp sand underneath a building during an earthquake? To answer such questions we need a theory, a “PV=nRT” for granular flows, that can make predictions under a wide range of circumstances.

NASA-supported researchers are working to develop such a theory through a combination of experimentation and mathematics. Jenkins, for example, is studying differential equations that describe molecular gases. It might be possible, he says, to adapt them for granular flows. He plans to test some of his ideas using a rotating chamber filled with beads; the device is slated for launch to the International Space Station (ISS) in 2007.

“We do this on the ISS,” he explains, “because granular flows are affected by both gravity and internal collisions. We need to get Earth’s gravity out of the picture to create a simpler system.”

Above: A sand column is compressed during an MGM experiment onboard shuttle flight STS-79. The speed of the movie is misleading; the complete sequence takes about an hour.

For the same reason, engineering professor Stein Sture of the University of Colorado is leading a series of experiments called “Mechanics of Granular Materials” (MGM) onboard the space shuttle. His device repeatedly squeezes a column of damp sand and records what happens. The goal, explains Sture, is to understand the liquid-like behavior of soil during some earthquakes. MGM has flown before on shuttle missions STS-79 and STS-89, and it’s slated for another flight in 2003 onboard the shuttle Columbia (STS-107).

Earthquakes, avalanches, planetary rings, coal mines... even bags of coffee. From the alien to the ordinary, we’ll understand them all a little better when this research is done.