Imagine that the adults in your life offered you something INCREDIBLE. All you had to do was to be diligent and apply yourself in some particular way...

Maybe horses are your favorite animal, so some adults promised to build you a stable right in your own yard and fill it with horses! All you had to do was “dig in” and really learn something they asked you to learn. Or perhaps you really like dolphins, so they offered you a giant tank filled with dolphins in your own backyard. Maybe instead they offered you your very own old-fashioned, full-sized sailing ship, like sea captains used to command. Wow!

If the offer was for something THAT big and unbelievable, do you think you would need to be reminded to care about your part? Would someone have to tell you to be focused in working towards your goal? Do you think your parents would have to say, “Don’t forget about working hard so you can have the horses”? Would they have to remind you, “Don’t forget to be focused so you can get your sailing ship”?

No way! You wouldn’t forget the promise for one minute! I’m sure you would work hard and do all the studying, reading, practicing, or whatever it took to earn that incredible reward. Even if you had to carry a book around with you wherever you went, you wouldn’t mind. The hope of getting that prize would give you all the energy you needed to put aside EVERYTHING else so you could focus on your goal.

Well, I don’t think we’ve got any stables or ships or dolphins waiting for you. But did you know that somebody has made you a bigger offer than that? I’m serious!!!

Inside YOU, does God’s offer seem as special as the offer of horses or ships? Think about it honestly. Don’t just answer based on what you SHOULD say. What does your LIFE say? How about today? Did you treat God’s offer as if it was AT LEAST as important as the offer of a dolphin tank?

Well, if you didn’t, then I’m challenging you to fight for GOD’S offer to FEEL just as INCREDIBLE in your heart as those other prizes. Will you do that? You see, I know that if you really understand WHO it is that is offering you Himself, you won’t be able to resist. It WILL consume your thoughts, just like one of those really big rewards would, and even more!!! So I challenge you to fight and fight until God’s offer is just as important to you as anything else you can imagine.

How can you fight? Well, one thing you could do is to let everything around you be an opportunity to think about Him. If you see a sunset, ask yourself why God made it pink. He didn’t have to, you know! He could have made a brown sunset. But, instead, He made it pink. Why? Next time you see a big tree, take a minute to just stand there and look at it. Think. WHY did God make trees look that way? Why are they so pretty? HOW did He create them?

As you think about the amazing things He has done, remind yourself that the SAME God who invented all of these incredible animals and plants and stars WANTS to be your Friend, your Father, your God. He wants to be very close to you.

Maybe it’s still hard for you to imagine how BIG this offer really is. Let’s try to illustrate it again.

Let’s pretend you are somebody who would really want the horses and stable as a reward. What if you found out that you actually weren’t going to get a real stable with horses in it? Instead, you were only going to have a tiny toy stable with some plastic horses. Would you still be just as motivated and excited? Probably not! Little plastic toys just wouldn’t be as important or appealing to you as real horses, would they? Obviously, there’s a real difference between a plastic horse and a real one, right?

Well, the truth is that all of the “neat” things in the whole world are just like plastic toys compared to the INCREDIBLE things God is offering to you!!! What He wants to give you is so special. It is over a million-billion times as special as having real horses or real ships of your own. If you don’t feel inside that His offer to you is really all that important, will you FIGHT to change how you see it??? FIND OUT how WONDERFUL HE IS!

Did you know that GOD (the Creator of the whole universe) is actually thinking about YOU right now?!?! Well, He is. In Psalm 40:17, David said, “As for me, I am poor and needy, but the Lord is thinking about me right now.” YOU are always on His mind. He doesn’t get distracted and later on remember, “Oh, I need to think about that child.” No, He is ALWAYS thinking about you!

And, you know what He wants from you? He doesn’t want you to do some really hard thing like jump to the moon or swim across the ocean or memorize all of the prepositions in the English language or learn 100 mathematical formulas. He doesn’t even ask us to do EVERYTHING just right all the time before we can be His friends. NO, that’s not what He asks.

He doesn’t demand some HUGE thing of us. “Just give Me yourself! It’s why you were made, after all. I’ll take such good care of you—so good that you wouldn’t believe Me if I told you!”

Won’t you think about HIM more than the things that are right in front of your face? There is no other offer more important than the one God holds out for you. “I want to be your friend. Will you think about Me?” He wants to hold you in the palm of His hand. Do you want to be there? FOREVER??? 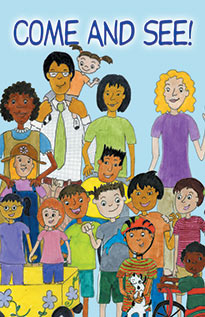