Excerpt From "Jesus In His Fullness"

We look in the mirror and wonder, ‘Hey, do I really know God?’

But suppose you and I (if we are truly in Covenant and in love with Jesus, rather than ourselves) approach our lives in a radically different way?

Let’s begin with the decision that Jesus, Himself, will be our All in All, believing that He alone is the way to the Father and that every spiritual blessing exists in Him.

That decision will have some revolutionary implications for our lives…

“Thomas said to Him, ‘Lord, we don’t know where you are going, so how can we know the way?’ Jesus answered, ‘I am the way and the truth and the life. No one comes to the Father except through me. If you really knew me, you would know my Father as well. From now on, you do know Him and have seen Him’” (John 14:5-7).

It Takes a Bunch of Children!

We look in the mirror and wonder, “Hey, do I really know God?” It’s interesting that Thomas and Philip and the others had been with Jesus so long, yet were still asking these same sort of questions. They really didn’t understand exactly who Jesus was; they didn’t know who the Father was; they didn’t know how the two were connected. After all this time with Jesus, it still wasn’t clear.

Jesus’ commitment to you is more real than your current introspection.

But Jesus made the comment: “From now on you know God.” I’m sure they scratched their heads at that point and said, “We do? I mean, five minutes ago we didn’t. But now we do—-right!” I’m certain Jesus’ words were a little frustrating for them. But it is encouraging that, while there’s a part that we play in being fertile soil and in not letting weeds take the place of God’s crop, the “work” of our knowing God seems to be God’s responsibility. The rest of John 14 records that Jesus went on to talk in great detail about the Holy Spirit’s place in the believer’s life in nurturing that relationship.

So I feel OK being dumb and having Jesus look at me and say, “You don’t know God, but now you know God.” The faith the Father is speaking from through His Son is that He knows the end as the beginning. It’s clear in His mind, and He’s actually trying to pass on a confidence to us that we won’t measure ourselves by how we feel or perform. There’s something bigger than that going on!

If you have ears to hear, understand this: Jesus’ commitment to you is more real than your current introspection.

...we must believe Him before we can live it out.

“We do?” Well, I can live with that. If Jesus says I know Him and His Father, then I’m not going to argue with Him. And while I may not be expressing the fullness of it, isn’t it also true that “greater is He who is in you than he who is in the world”? Isn’t it true that it is by faith that we can throw mountains into the sea? Doesn’t Christ dwell in our hearts by faith? As a prerequisite for our experiencing what He said, we must believe what He said. And if He says that my knowledge of Him in His mind is real, then the only question is whether I’m willing to believe that my knowledge of Him is complete in Him.

If I don’t believe that Jesus is the Way, I’m going to be constantly frustrated and wandering and experimenting in confusion. But if I believe Jesus is the Way, it’s a pretty simple matter to escape the confusion that satan would try to throw into my mind. As God has promised us that we can know Him—and that in His mind, we already do—then we must believe Him before we can live it out.

That’s a real mystery. I admit it to you freely. We’re wired in such a way that we tend to demand proof before we actually accept something as true. Jesus came to rewire us! He has told us, “What I say is true. The Word became flesh. I am the Truth. Forget what you’ve heard or experienced—what I say to you is truth.” It takes a bunch of children to live that way!

“OK! I don’t know what that means, but I know it’s true. Now all I have to do is find out how it’s true.” There’s no debate about whether it’s true; it is true.

“Help me to see how I know You. I didn’t think that I did, but I’m obviously wrong, because You said I do. So I do!”

Actually, there are a lot of Scriptures that call us to make that kind of response. For example: “Reckon yourselves dead to sin.”

And in your mind you can argue with God! I don’t recommend that. For one thing, you’re going to be wrong every time! For another, you’re never going to experience life in Christ as long as you’re walking in unbelief. You’re never going to be able to experience the reality of the gospel of Jesus in your life, and you will be like millions of others who have gone to their graves never experiencing Christianity, although they professed it. Why is that? Because they walked in unbelief. Just like the Hebrews, they didn’t combine it with faith. They heard the words, but they didn’t believe them. They let their experiences dictate how they felt and how they looked at themselves. Whether they considered themselves dead to sin depended on how they did this morning, not on what God said.

I am dead to sin. I am dead to sin. How do I know that? Because God said so. My experience doesn’t measure up? Well, that’s my problem. God said it’s true, so it’s true! Now I just need to believe that. The living out of that truth will follow belief. It won’t precede faith!

The answer to every single question is in Jesus.

You have to get that straight about Christianity. That’s the point Jesus was making when He said, “I am the Way, and the Truth, and the Life. If you’ll just understand that your ability to have the Way, the Truth, and the Life—the Zoe life, the eternal life, the power of the galaxies inside your mortal body—depends on whether you are hiding in Jesus for their fulfillment. To attempt to attain those things by your own effort is futile! You will never attain the Way, the Truth, and the Life; they are hidden in Christ to the glory of God. The only way to have them is to rest in Jesus, to find your life and your hope in Him no matter how you feel, to “believe in the One whom the Father sent.”

Stop right at Jesus as the answer to your questions.

“Was Jesus dead to sin?”

The answer to every single question is in Jesus. He is the answer. He doesn’t give a big rule book so that we can figure out the formulas and memorize the answers, and—provided we figure all the formulas right—then: Yeah! “The Victorious Christian Life” (whatever that is). Or “the perfect church.” Life in Christ is not a matter of formulas, and neither is corporate life. The church consists of a bunch of people that are totally sold out—not just in a committed sense, but in the sense that Jesus is the answer to their every question about their lives. Otherwise, you can be saved, but you can’t experience salvation in this current life. If Jesus isn’t the answer to every question about who you are and what strength and abilities and talents you have, what impact you can have on another’s life, how you feel about yourself—if He’s not the answer, then you’ll continue to live a futile, frustrated life. That’s not God’s will for you. Jesus came that you could have life in abundance. Frankly, as you know, not a lot of people have experienced that.

The Father’s every hope and every dream have been fulfilled in you, as you believe on the One He has sent.

Your willingness to love the truth is the beginning of your ability to walk in the gospel, the good news of Jesus, and to “taste the powers of the coming age” in this current age. You really can experience that kind of walk! Paul did. He wrote of being “seated with Christ in the heavenly realms.” Did he learn about that in theology class under Gamaliel? What Old Testament passage was he quoting? There isn’t one! The truth was that Jesus had revealed to Paul his position in Christ. As a result, he was living a life seated with Christ, and he simply described what he was seeing. “Best way I can describe it is that it’s kind of like being seated with Christ in the heavenlies. Yeah, that would be a good way to say it.” He was expressing what he was experiencing. That’s the way God wants us all to live. That is your destiny! That’s your place! That’s who you are—as you are willing to accept and believe that God said so, and as you allow Him to write it on your heart.

Announce that it’s true, to the world and to the accuser of the brethren and to your own face in the mirror. Proclaim that Jesus is the fulfillment of God’s every requirement of you, that Jesus is the “Yes” and the “Amen” to every promise and every hope of God—past, present, and future. I don’t know another way to say it—just settle this stuff in your heart! When you look in the mirror and you’ve failed, and you’re frustrated and tempted when the children are crying in stereo, when stuff is happening to you, make sure that you do not falter or waver from this foundational point: Whatever else may be true, Jesus is the answer. The answer has already been given. It’s been spoken. The Word has become flesh. The Father’s every hope and every dream have been fulfilled in you, as you believe on the One He has sent. Jesus is the Way.

“Did Jesus make it?”

“I made it! I made it!” Can you believe that? Can you look into the Father’s eye and say, “I made it!” Or are you busy looking at yourself, not believing what God has said and kicking in the dirt, asking, “Am I going to make it or not? I don’t know. I wonder if I can?”

And while you are at it, “Encourage one another with these words.”

Don’t live that way! God will love you anyway, but He doesn’t want you to live a frustrated, miserable low life. So don’t! And while you are at it, “Encourage one another with these words.” When you see somebody who isn’t seeing things as Jesus would, who is looking at himself in a way not in line with the hope and promise of the gospel, the good news of Jesus, then encourage one another. “Go forth and multiply and fill the earth”—with the good news of Jesus. He has fulfilled Father’s every requirement of you, and He is the answer to every question about your worth, your value, your potential—the Way, the Truth, and the Life. 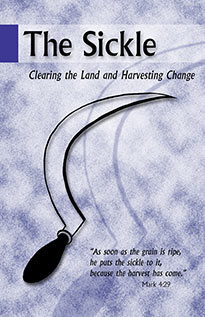