“A young man ran and told Moses, ‘Eldad and Medad are prophesying in the camp.’ Joshua son of Nun, who had been Moses’ assistant since youth, spoke up and said, ‘Moses, my lord, stop them!’ But Moses replied, ‘Are you jealous for my sake? I wish that all the LORD’s people were prophets and that the LORD would put his Spirit on them!’” (Numbers 11:27-29).

True leadership is one that understands Jeremiah 31: 31-34 and is working toward helping all of God’s people, from the least to the greatest, KNOW Him, rather than perpetuating the stand-in-front-of-an-audience-and-tell-them-how-to-live covenant that has been OVER with for 2,000 years!

As Father, King of the universe has declared, “In these last days, call the bridegroom from his quarters and the bride from her private room. Bring everyone—the elders, the children, and even the babies. I will pour out My Spirit upon all people. Your sons and daughters will prophesy, your young men will see visions, and your old men will dream dreams. I will pour out My Spirit upon all My servants, men and women alike, and they will prophesy. They will be like mighty warriors, plunging through defenses, running along the city walls. (Joel 2, Acts 2)

Oh God, You are our Father,

You’ve given us Your best

But how much we return to You

Will stand the fire’s test?

We can’t taste Your Spirit

If we’re feeding our own flesh

The need remains the same

We want to see You have a house

That’s worthy of Your Name

Take the spark inside of us

And turn it into flame

A people who know You

A people who show You

To all those without You

A people who’ve learned to walk with You

And love one another

And looked the other way

But we won’t let the past

Determine how we live today!

Make us bold as lions

Who are hungry for the prey

From Enoch to Elijah,

You’ve always had someone

To shout Your Truth above the lie

Must rise up to prophesy!

Revealing their need for Jesus!

A people who heal the nations’ wounds

Feeling the Wind of Your Glory

Knowing a MAN, not a “story”

Learning to sense cloaks of shame and of pretense

And as we draw nearer

We see the signs growing clearer

And set the course for our future

And loving each other 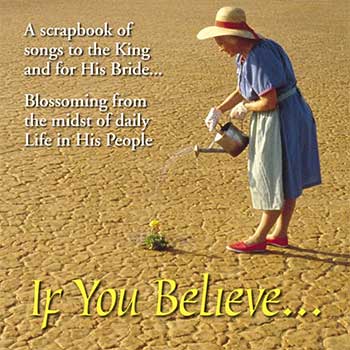