Moods and Our Peanut Butter Circuitry 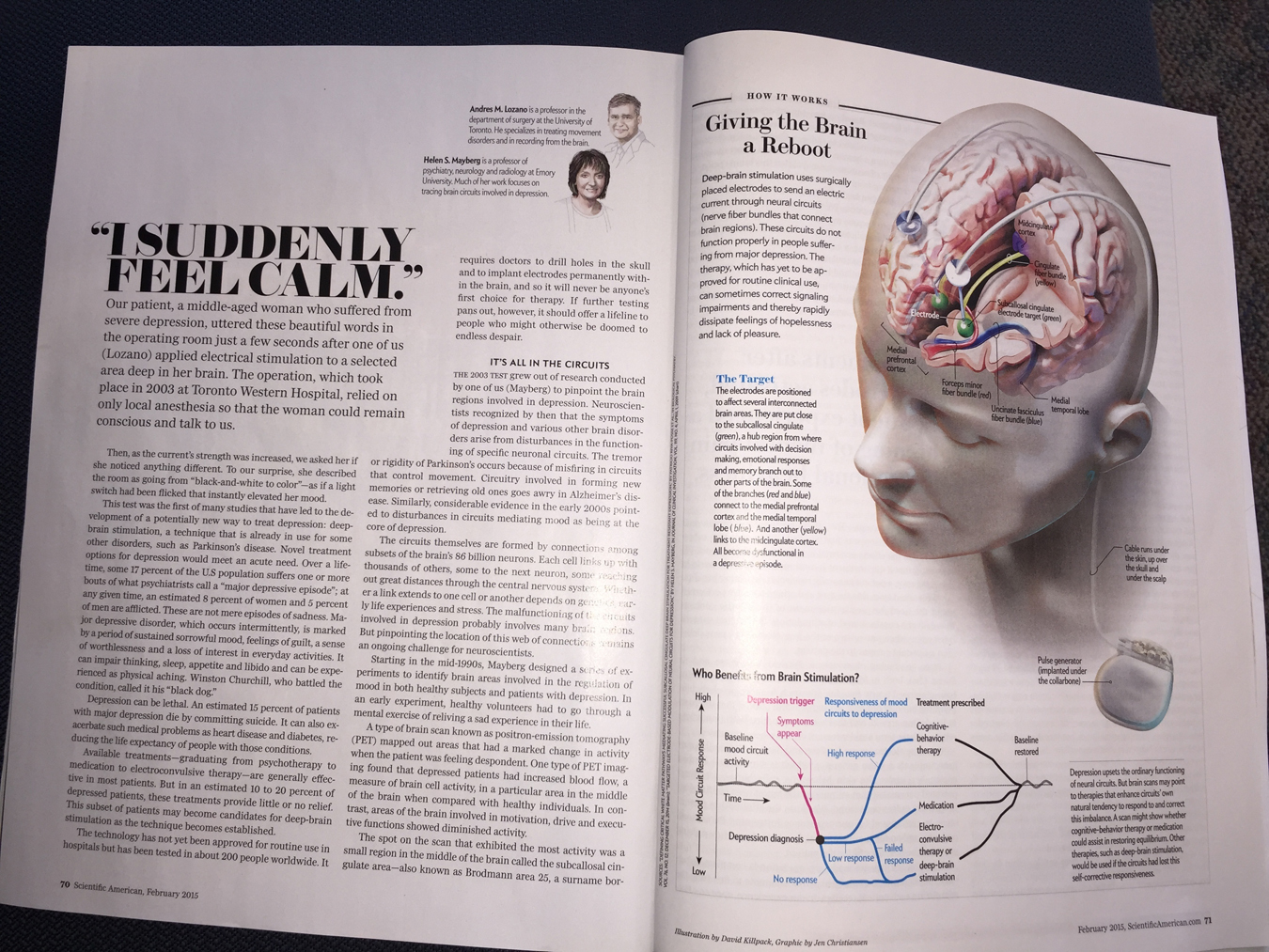 “I suddenly feel calm.” Our patient, a middle-aged woman who suffered from severe depression, uttered these beautiful words in the operating room just a few seconds after one of us (Lozano) applied electrical stimulation to a selected area deep in her brain. The operation, which took place in 2003 at Toronto Western Hospital, relied on only local anesthesia so that the woman could remain conscious and talk to us.

Then, as the current’s strength was increased, we asked her if she noticed anything different. To our surprise, she described the room as going from “black-and-white to color”—as if a light switch had been flicked that instantly elevated her mood.

This test was the first of many studies that have led to the development of a potentially new way to treat depression: deep-brain stimulation, a technique that is already in use for some disorders, such as Parkinson’s disease. Novel treatment options for depression would meet an acute need. Over a lifetime, some 17 percent of the U.S. population suffers one or more bouts of what psychiatrists call a “major depressive episode”; at any given time, an estimated 8 percent of women and 5 percent of men are afflicted. These are not mere episodes of sadness. Major depressive disorder, which occurs intermittently, is marked by a period of sustained sorrowful mood, feelings of guilt, a sense of worthlessness and a loss of interest in everyday activities. It can impair thinking, sleep, appetite...and can be experienced as physical aching. Winston Churchill, who battled the condition, called it his “black dog.”

Depression can be lethal. An estimated 15 percent of patients with major depression die by committing suicide. It can also exacerbate such medical problems as heart disease and diabetes, reducing the life expectancy of people with those conditions.

Available treatments—graduating from psychotherapy to medication to electroconvulsive therapy—are generally effective in most patients. But in an estimated 10 to 20 percent of depressed patients, these treatments provide little or no relief. This subset of patients may become candidates for deep-brain stimulation as the technique becomes established.

The technology has not yet been approved for routine use in hospitals but has been tested in about 200 people worldwide. It requires doctors to drill holes in the skull and to implant electrodes permanently within the brain, and so it will never be anyone’s first choice for therapy. If further testing pans out, however, it should offer a lifeline to people who might otherwise be doomed to endless despair.

The 2003 test grew out of research conducted by one of us (Mayberg) to pinpoint the brain regions involved in depression. Neuroscientists recognized by then that the symptoms of depression and various other brain disorders arise from disturbances in the functioning of specific neuronal circuits. The tremor or rigidity of Parkinson’s occurs because of misfiring in circuits that control movement. Circuitry involved in forming new memories or retrieving old ones goes awry in Alzheimer’s disease. Similarly, considerable evidence in the early 2000s pointed to disturbances in circuits mediating mood as being at the core of depression.

The circuits themselves are formed by connections among subsets of the brain’s 86 billion neurons. Each cell links up with thousands of others, some to the next neuron, some reaching out great distances through the central nervous system. Whether a link extends to one cell or another depends on genetics, early life experiences and stress. The malfunctioning of the circuits involved in depression probably involves many brain regions. But pinpointing the location of this web of connections remains an ongoing challenge for neuroscientists.

Starting in the mid-1990s, Mayberg designed a series of experiments to identify brain areas involved in the regulation of mood in both healthy subjects and patients with depression. In an early experiment, healthy volunteers had to go through a mental exercise of reliving a sad experience in their life.

A type of brain scan known as positron-emission tomography (PET) mapped out areas that had a marked change in activity when the patient was feeling despondent. One type of PET imaging found that depressed patients had increased blood flow, a measure of brain cell activity, in a particular area in the middle of the brain when compared with healthy individuals. In contrast, areas of the brain involved in motivation, drive and executive functions showed diminished activity.