How do I get There

A picture I had in my mind was the idea that I wanted to be like a soldier. Paul talked about being like soldiers in some ways. When a soldier gets an order that he is going to be shipped out to go do some work that he has been chosen to do, he doesn’t sit and think, “Man, how am I going to pay for that? How am I going to afford to get there? It’s going to be really expensive.” The expenses have already been taken care of. He’s been provided for. He’s in the army and they take care of all that. He just has to show up and do what he’s told. It doesn’t even cross his mind to say, “I’m going to have to put plane tickets on the credit card. Or what will I bring to eat?” None of that stuff. It’s all taken care of. The soldier shows up at the time he’s supposed to go, and he goes. He gets on the plane, and he gets there, and gets out and does what he’s supposed to do.

I want to be that way with finances. I have a hard time trusting God with finances sometimes even though I shouldn’t, because of so many things that have happened. Finances are one area. But there are also a lot of other areas where I want to be in a position where I believe if God tells me to do something or I know God wants me to do something - I know all the details are going to be taken care of. I don’t have to sit down and figure out how to pay for the plane ride. I don’t know what it takes to get there. How do you get there from here when that is just who you are right now? To get to where it wouldn’t even cross your mind how you would pay for it, if God called you to move to another country. You just concern yourself with getting where you need to be at the right time and doing what you are supposed to do. I’ve had a lot of miraculous things happen in my life where there is just no way to explain it except for God. I’ve read the Bible lots of times. What does it take? I feel like those disciples at the base of the mountain. I have plenty of evidence. It’s almost a shame to call it faith. It’s not really faith because it’s based on experience with God. I should be better at this than I am. Does it take more time with God? Does it take more belief? Is it just a decision where you say, I’m just going to do it? How do you get there? I see it as being a really good picture of the way life should be, that you are just a soldier. You do as you’re told, and you don’t worry about the details. 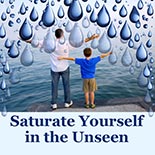