It is only the process of fighting out of the cocoon that gives the butterfly the strength to fly!

Question: As we are sharing with people the Truths of Jesus, and people want to repent and come out of their denominations, what should we tell them?

Even if people want to come out of their denominations, it is best to try to stop them if you can! The reason is this... If they know or have recently discovered Truths of God such as confessing sins to each other, bearing one another’s burdens, admonishing one another daily, and removing leaven from the batch (these Truths that have always been in the Bible but have been forgotten, or ignored, or just rebelled against), then they should share these things with their closest friends. We push people to take the Truths that they’ve seen from God and share those with other people in the denominations.

They have friends and family members who are a part of these denominations. The Bible says the one who is given a Trust must prove faithful with it. If that person we’ve met has gifts from God through God’s word, they must be obedient and faithful with the relationships they already have. When people are obedient and faithful with their current relationships, then one of two things will happen. Either many lives will be changed in that denomination, and together they will throw away their “labels” and “titles”, or like Jeremiah, the person who is trying to uphold and live out God’s Truths will be thrown in a well, and kicked out of the denomination.

Ask people who are beginning to see these Truths of God to stay and be faithful with their friends and their family with no compromise at all and without blending into disobedience.

But someone who repents and just tiptoes out the back door is not being faithful with the Truth that God has given them. If you were in a hotel and you smelled smoke and saw that there was a fire, if you tiptoed out the back door you would be responsible for many people dying. When someone discovers that a denomination is “burning down,” don’t let them tiptoe out the back door. We teach people to shout from the rooftops, “Learn the ways of God! Obey God! I have great news—there are many Truths that we’ve not experienced yet! We can be set free from sin! We can be one people instead of scattered individuals! We can be a true Church that the gates of hell can’t prevail against!” So we encourage people to stay in the denominations and be faithful with their family and their friends, and then either a miracle will happen, or they will be kicked out. But we don’t let them sneak out the back door when they smell smoke.

If everyone is obedient in that way, and we call everyone to be obedient that way, then it’s not us building the Church, it’s JESUS building His own Church. We are not trying to collect people that think like we think. We are trying to make everyone obedient to the ways of God, wherever they are. And when Jesus shakes the tree, good fruit will come down. There might be ten more good people in that denomination. There might be a hundred more good people in that denomination. But if someone sneaks out the back door and leaves the denomination quietly, then there are ten people or a hundred people that could have had their lives totally changed...and they would never know.

If everyone is obedient in that way, then it’s not us building the Church, it’s JESUS building His own Church.

If you have a caterpillar’s cocoon, and you take a razor blade and cut it open so that you can pull out the butterfly, it will never fly. It is only the process of fighting out of the cocoon that gives the butterfly the strength to fly!

So ask people who are beginning to see these Truths of God to stay and be faithful with their friends and their family with no compromise at all and without blending into disobedience. Ask them to stand with courage in these Truths that they’ve discovered from God. If they will be faithful, obedient, courageous, and willing to pay any price regardless of any potential rejection, then they will be like the caterpillar that is turning into a butterfly and breaking out of the cocoon.

People will learn many of the ways of God just by all of the rejection they experience. So we won’t steal growth away from them by cutting open the cocoon and taking out the butterfly. We make them fight their way out…so that THEY CAN FLY!!!!! 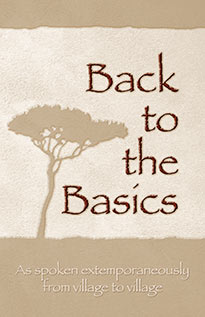